CBS
Added to the database on December 19, 2013
Rate
(21 votes)
Cast & Characters | Broadcast History | Theme Song | DVDs | Watch Episodes | Photos | Trivia | Comments
The Petticoat Junction is a sitcom that aired on CBS from 1963 until 1970 about a widow and her three daughters who operated a hotel on the outskirts of a small rural town. The girls' feeble-minded Uncle Joe often came up with zany ideas that put the hotel in jeopardy.
Sometimes the girls themselves would get into jams requiring their mom, her friends, and occasionally even Uncle Joe to find a way out for them. A "colorfull" cast of characters checked into the hotel and more visited from town on the train. 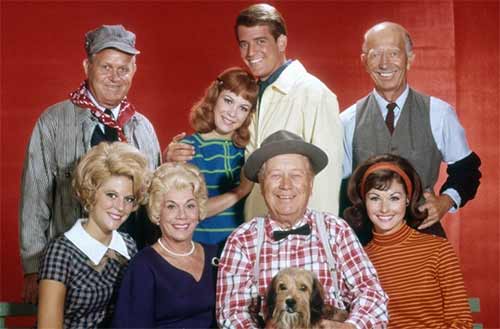 Lotsa curves, you bet. Even more when you get
To the junction, Petticoat Junction.


The Girls from Petticoat Junction Album

The location for most of the scenes on Petticoat Junction was the Shady Rest Hotel outside of a small farming town named Hooterville. Beginning in Petticoat Junction's third season, several of the regular characters on the series were used to "spin-off" a new series titled, "Green Acres". That series was about a farmer and his wife who had a farm that was also located outside of Hooterville. For three seasons, characters from both series regularly guest-starred on each other's shows!

The train that connected Petticoat Junction was an "antique" steam engine type called the Hooterville Cannonball. Many of the shots of the Cannonball on the show were really just a plastic shell of the exterior. A real train in Sonora, California was used as the model and when the train was actually moving, those were shots of the real train. The fake one only had one set of wheels that would have to be moved from the engine to the passenger and baggage cars depending on which one was in the scene!

The creator of Petticoat Junction, "Paul Henning", got the idea for the series from stories his wife told him about summer vacations she had spent at a small hotel situated near a train station in Eldon, Missouri.

Paul Henning interviewed more than 1,500 young women for the roles as Kate Bradley's three daughters! Bea Benaderet urged him to pick one actress in particular and he gladly took her advice since it was his real-life daughter, Linda Henning. Linda was the only one of the three original girls to stay with the series until it final episode. In fact, the only other cast members who remained for the entire run were Edgar Buchanan (Uncle Joe) and Frank Cady (Sam Drucker).

Frank Cady appeared as Sam Drucker on "Petticoat Junction", "Green Acres", and "The Beverly Hillbillies" simultaneously! No other actor has ever done that on three sitcoms at the same time!

A petticoat is an undergarment that women wore in order to add fullness to a skirt. In the opening sequence of Petticoat Junction we saw the three girls' petticoats hanging over the side of the watertank that provided water for the Hooterville cannonball. They were hanging there because the girls were obviously bathing in the water tank. That's where the series got the first word in its title. The second word, "Junction" is presumed to refer to the fact that the Shady Rest Hotel was located at the junction of two rail lines, although only the one to Hooterville was ever mentioned on the show.