NBC
Added to the database on October 13, 2008
Rate
(10 votes)
Cast & Characters | Broadcast History | Theme Song | DVDs | Watch Episodes | Photos | Trivia | Comments
Quantum Leap is a drama series that aired on NBC from 1989 to 1993 that starred Scott Bakula as Dr. Sam Beckett, a physicist from six years in the future who becomes lost in time following a time travel experiment, temporarily taking the places of other people to "put right what once went wrong".
Former test pilot Sam Beckett finds himself trapped in time due to an experiment gone awry, leaping into the body of a different person each week. Dean Stockwell co-starred as Al Calavicci, Sam's womanizing, cigar-smoking sidekick and best friend, who appeared as a hologram that only Sam, animals, young children, and the mentally ill could see and hear. Al, at first known only as The Observer, is Sam's holographic adviser -- he provides Sam with some details about his new identity and gives him guidance on how to help the people affected by his presence. Al never gives Sam all the info he needs, forcing our hero to bluff his way through many a wacky situation. 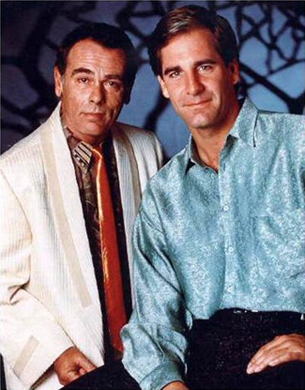 Scott Bakula, in the role that made him a star, plays Sam Beckett, a scientist who's part of a time-travel experiment that "went a little... ka-ka." Unable to return to his own time, and aided only by Al (Dean Stockwell, whose rapport with Bakula is one of the series' most appealing elements), his cigar-smoking, peculiar-dressing, sex-obsessed, holographic "enabler," Sam "leaps" unpredictably from one time period and person to another, usually completely out of his element (as a pilot, a boxer, a cowboy, an English lit professor, even an elderly black man in segregated '50s Alabama) and always in a situation that needs to be "made right" before he can leap onward. Generous helpings of humor, drama, physical action, and sentimentality (this is TV, after all) keep things moving, as do references to many other classic films and genres (Driving Miss Daisy in "The Color of Truth," Casablanca in "Play it Again, Seymour," boxing in general in "The Right Hand of God") and what creator Donald Bellisario calls the occasional "kiss with history" (Sam crosses paths with the young Buddy Holly and Michael Jackson, among others). It doesn't all work, as Quantum Leap occasionally becomes too cute and facile for its own good.