NBC
Added to the database on September 23, 2008
Rate
(26 votes)
Cast & Characters | Broadcast History | Theme Song | DVDs | Watch Episodes | Photos | Trivia | Comments
ALF is an American science fiction sitcom that originally aired on NBC from 1986 to 1990, created by Paul Fusco. The title character was Gordon Shumway, a friendly extraterrestrial nicknamed ALF (an acronym for Alien Life Form), who crash lands in the garage of the suburban middle-class Tanner family.
"He's just like E.T.," says a character of the fuzzy extraterrestrial stranded on Earth in the pilot episode of ALF. But the fun of this late 1980s family sitcom is that the sardonic ALF (an acronym for Alien Life Form) is nothing like the interplanetary innocent of Steven Spielberg's classic. With his whiplash wit and huckster sensibility, ALF (real name: Gordon Shumway from the late planet Melmac, Lower East Side) enters the lives of the Tanner family as a fully formed rascal whose spacecraft crashes into their garage one night. Worried that the feds will chop ALF up for research purposes, the Tanners--father Willie (Max Wright), a cautious civil servant who doesn't like a lot of fuss at home; wife Kate (Anne Shedeen), and kids Lynn (Andrea Elson) and Brian (Benji Gregory)--reluctantly take ALF in like a shambling, profligate uncle who cracks wise despite having fallen on hard times. 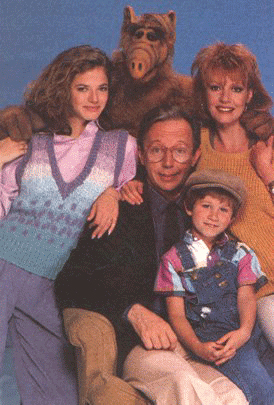 
View all ALF DVDs, books, merchandise and collectibles from Amazon.com

Alf had to leave Melmac suddenly because it blew up. The Planet was named Melmac because it was composed of something called Melmac. No further explanation was ever given.

Max Wright had starred on three other series prior to ALF. They were, "Buffalo Bill", "Misfits of Science", and "The Norm Show".

Paul Fusco did not only provide the voice for Alf. He was also the creator and producer of the series.

Alf was perhaps an even bigger hit in Germany than in the U.S. but it did cause some headaches for a German city named, "ALF". The city limit signs with the name of the city on them kept getting stolen! The town finally decided to have a large number of them produced and sold them to earn revenue!

Andrea Elson guest-starred on many other series before appearing on ALF including "Simon & Simon" (1981), "Silver Spoons" (1982), and "Parker Lewis Can't Lose" (1990). She also co-starred on a show titled, "Whiz Kids". Alf's real name was Gordon Shumway. His heart was located inside his ear.

All but a couple of the episode titles are also the titles of songs. Every title somewhat explains the plot of that particular episode.