Have Gun - Will Travel

CBS
Added to the database on January 22, 2009
Rate
(19 votes)
Cast & Characters | Broadcast History | Theme Song | DVDs | Watch Episodes | Photos | Trivia | Comments
Have Gun — Will Travel is an western drama series that aired on CBS from 1957 through 1963. It was rated either number three or number four in the Nielsen ratings during each year of its first four seasons. It was one of the few television shows to spawn a successful radio version.
A knight without armor in a savage land, Paladin (Richard Boone) was a unique gunfighter. A highly educated and well-traveled man, Paladin enjoyed the finer things in life, and always preferred peaceful solutions over violent confrontations. But if no peaceful resolution was possible, Paladin was a lethal marksman. Have Gun - Will Travel was a huge hit in its day, thanks in part to its writers Gene Roddenberry (Star Trek), Bruce Geller (Mission: Impossible, and Harry Julian Fink (Dirty Harry). 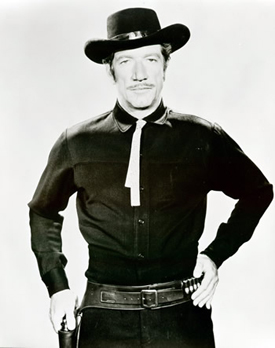 Making its debut on September 14, 1957, the half-hour show ranked no. 4 in the ratings for its entire first season, which ran almost completely uninterrupted (minus a one-week preemption) until June of 1958--a punishing schedule unheard of in present-day television. (It ranked even higher in subsequent seasons, holding the no. 3 spot, behind Gunsmoke and Wagon Train.) Richard Boone was perfectly cast in the lead role of Paladin, a cultured gunslinger whose West Point education, impeccable style, literate sophistication, and distinguished Civil War service made him unique among Western heroes, and the prototype for many dashing figures to follow. Based in San Francisco's ritzy Carlton Hotel, he scans newspapers to locate trouble throughout the wild West, then cagily markets his services (via his legendary calling card, "Have Gun--Will Travel") as a hired gun, moral arbiter, voice of reason, and reluctant killer of badmen. Understanding the complexities of frontier justice, Paladin (whose full name is never revealed) could turn on those who hired him if he suspected dubious motivations. He wore black, but he traveled in an ethical gray zone.

Have Gun - Will Travel on DVD


View all Have Gun - Will Travel DVDs, books, merchandise and collectibles from Amazon.com

Have Gun - Will Travel Trivia

Richard Boone was a decendant of Daniel Boone.

Gene Roddenberry (creator of the original Star Trek TV show) was also one of the writers for Have Gun Will Travel.

Paladin used a single-action Colt .44 with a long, rifled barrel. It had a one-ounce trigger pull and was hand-made to his own specifications.

While Paladin often spared the life of a bad guy (if they weren't too bad), if Paladin was injured by the bad guy, they ALWAYS ended out dead!

Paladin would switch sides against his employer if he discovered that they were really the evil one.

John Dehner who played the role of "Paladin" in the 1958-1960 Have Gun Will Travel radio show was the first choice for that role on the TV show. He was, however, contractually obligated to Warner Brothers Studios at the time due to his role on the TV program "The Roaring 20's" and couldn't take the job.