CBS
Added to the database on October 20, 2008
Rate
(19 votes)
Cast & Characters | Broadcast History | Theme Song | DVDs | Watch Episodes | Photos | Trivia | Comments
WKRP in Cincinnati is sitcom that aired on CBS from 1978 to 1982 that featured the misadventures of the staff of a struggling fictional radio station in Cincinnati, Ohio. The ensemble cast consisted of Gary Sandy, Howard Hesseman, Gordon Jump, Loni Anderson, Tim Reid, Jan Smithers, Richard Sanders and Frank Bonner.
WKRP in Cincinnati, an MTM production, was created by Hugh Wilson, who had previously written scripts for MTM's The Bob Newhart Show and served as a producer on the short-lived MTM production The Tony Randall Show. MTM, which had not had a big comedy hit since Rhoda several years earlier, was counting on WKRP to revive the company's reputation as the best producer of situation comedies. 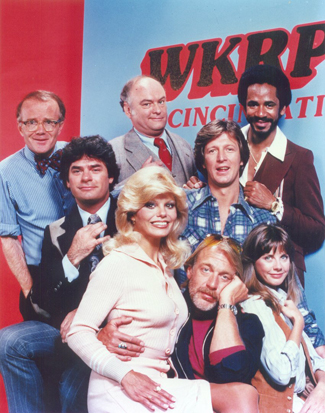 WKRP debuted in a tough slot, 8:00 on Monday nights, followed by a forgettable and short-lived show called People. Despite strong reviews for the pilot episode, and some positive buzz for an episode called "Turkeys Away," WKRP did poorly in the ratings and was put on hiatus by CBS with five episodes still unaired. Most reports at the time suggested that this "hiatus" was likely to be permanent, but CBS surprised many by bringing the show back in January of 1979, again on Monday nights but this time following the long-running hit M*A*S*H. Though CBS claimed that the series had been "retooled" in the interim, not much had changed except the construction of a new set (the "bullpen" with desks for Les, Bailey, Herb and the DJs) and a slight shift in emphasis: Whereas earlier episodes had focused mostly on Andy Travis, Mr. Carlson and Johnny Fever, WKRP re-emerged as a true ensemble series in which all eight regular characters were of roughly equal importance.
In this new time slot, WKRP was a hit, part of a high-quality CBS Monday night lineup of M*A*S*H followed by three series from MTM: WKRP In Cincinnati, The White Shadow, and Lou Grant. Loni Anderson, as Jennifer, became a national sex symbol, while Howard Hesseman as Johnny Fever almost matched her in popularity. Early in 1980, however, CBS moved WKRP away from Monday nights, trying to find a night where it could anchor an uneven lineup. Unfortunately some CBS executives apparently did not care for WKRP, and other executives mistook it for a kids' show based on the rock n' roll music and loud clothes. Thus they had a habit of preceding and following it with shows that were much more lowbrow than the MTM-style humor of WKRP -- for example, on one night WKRP was followed by the Alice spin-off, Flo. In time slots like these, WKRP's ratings dropped badly.

The time-slot changes eventually became more frequent and more ill-considered as CBS looked for a spot where WKRP would finally fit in. The show also seems to have received only limited support from MTM (particularly after the departure of MTM founder Grant Tinker, who left to run NBC), which was busy conquering the world of hour long drama with shows like Hill Street Blues. In the summer of 1982, CBS announced that WKRP had been canceled.

To the surprise of almost everyone, WKRP finally became a breakout hit when its 90 episodes were released to syndication; its long life in syndication eventually made it, according to Grant Tinker, the biggest moneymaker in the history of MTM. Some cast members remarked that WKRP was a hit in reruns because viewers finally new where to find it.

WKRP In Cincinnati On DVD

WKRP was suppossedly at 1530 on the AM dial and the station's mascot was a Carp (fish).

Several times during the show a character would talk about "Mayor Springer." Today, we know his as "Jerry Springer" the talk-show host. Yes, he was actually the mayor of Cincinnati at that time!

Loni Anderson was the 1st runner-up in the 1964 Miss Minnesota contest.

Doctor Johnny Fever had been fired from a job in Los Angeles for saying the word "Booger" on the air.

The TV show was nominated for 2 Emmys and 3 Golden Globes, all for Loni Anderson as Best Actress. Unfortunately, she didn't win any of them.