NBC
Added to the database on October 14, 2008
Rate
(15 votes)
Cast & Characters | Broadcast History | Theme Song | DVDs | Watch Episodes | Photos | Trivia | Comments
St. Elsewhere is a medical drama series that ran on NBC 1982 to 1988 set at fictional St. Eligius, a decaying urban teaching hospital in Boston's South End neighborhood. The show starred Ed Flanders, Norman Lloyd and William Daniels all as teaching doctors, who gave interns a promising future in making critical decisions.
Beginning its six-year run in 1982, St. Elsewhere was neither television's first ensemble medical drama nor, heaven knows, its last. Even now, when "reality" programming blights the landscape like some biblical plague, doc, cop, and lawyer shows remain staples of the medium, and while the likes of C.S.I., E.R., and Grey's Anatomy have it all over St. Elsewhere in the sizzle department--the production values are much flashier, the content sexier, more graphic, and faster-moving, the technology both in front of and behind the camera light years more sophisticated--the older show, despite its somewhat cheesy '70s vibe, is the hands-down winner when it comes to the actual steak. That's because it does it the old-fashioned way: by relying on good writing, vividly-drawn, identifiable characters, and excellent performances by an eye-opening group of actors. 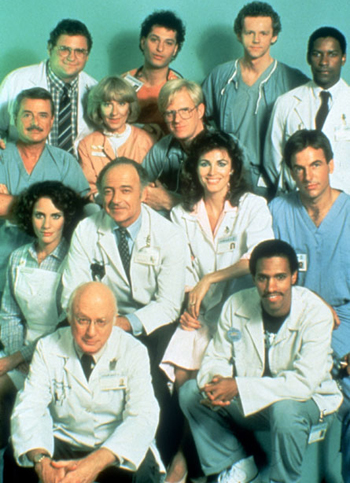 Co-creators Joshua Brand and John Falsey's pilot episode, which establishes the scene at Boston's St. Eligius Hospital (mocked as "St. Elsewhere" due to its rundown facilities and reputation as a "dumping ground" for the poor and disenfranchised), isn't especially promising. While we can see right away that the show sports a lighter, more humorous tone than others of its genre, the direction is static, the acting and dialogue are often stiff, and what passes for "chaos" is pretty tame. But it hits its stride almost immediately thereafter, as the characters (including Howie Mandel's wisecracking Dr. Fiscus, David Morse's driven, committed Dr. Morrison, William Daniels' egotistical, pompous Dr. Craig, and Ed Begley, Jr.'s nerdy Dr. Ehrlich) are more fully realized. The cast, in fact, may be the most impressive ever assembled for a TV program: in the first season alone, the list of actors with regular, recurring, and one-shot appearances includes future movie stars Denzel Washington (a regular, but his role is minor), Tim Robbins, Ally Sheedy, Christopher Guest, Laraine Newman, Ray Liotta, Tom Hulce, Michael Madsen, and Rae Dawn Chong. Sure, some of the multiple storylines are dated: the handling of issues like gun control, immigration, and terrorism seems almost quaint by today's standards, and a running gag concerning ladies man Dr. Samuels' (David Birney) having to inform his many lovers that he has gonorrhea comes off as tasteless and unfunny, notwithstanding that era's low awareness of AIDS and other STDs.