ABC
Added to the database on October 9, 2008
Rate
(17 votes)
Cast & Characters | Broadcast History | Theme Song | DVDs | Watch Episodes | Photos | Trivia | Comments
Perfect Strangers is a sitcom that aired on ABC from 1986 to 1993 that chronicled the rocky coexistence of midwestern American Larry Appleton (Mark Linn-Baker) and his distant cousin from eastern Mediterranean Europe, Balki Bartokomous (Bronson Pinchot).
Relying on the tried-but-true odd-couple set up, Perfect Strangers focuses on the comical lives of Larry Appleton (Mark Linn-Baker) and Balki Bartokomous (Bronson Pinchot). Larry is an uptight American who has moved away from his family's Wisconsin home for his own apartment in Chicago. His life is changed forever when his childlike cousin Balki--a sheepherder from the fictional island of Mypos--shows up on his doorstep with the goal of becoming a U.S. citizen. A hit sitcom for ABC that ran from 1986 to 1993, Perfect Strangers offers some heartwarming storylines, a few laughs, and some genuine chemistry between the two leads. The first few years of the comedy are among the show's best, as Larry and Balki get accustomed to each other's ways. Linn-Baker plays the straight man who sets Pinchot up to deliver the best lines. While Pinchot definitely has the showier "fish out of water" part--and "Don't be ridiculous!" tag line that became a catchphrase for a year or two--Linn-Baker creates the more relatable character. He's working in a small shop, but his dream is to become a photojournalist. The show actually does a nice job of making sure Larry never loses sight of his goals, even as Balki is dragging him from one adventure to another. 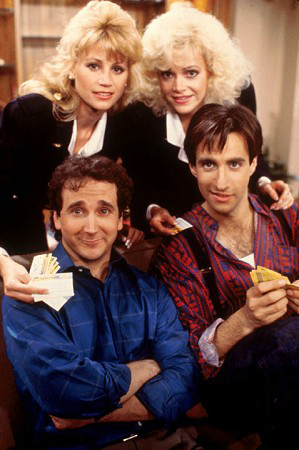 Harriet Winslow and Carl Winslow both appeared on the series "Family Matters" making it a "spin off series" of Perfect Strangers.

The name of the stuffed sheep that Balki was so crazy about was "Dimitri".

The exterior shots of Balki and Larry's apartment building for the first two seasons was actually the Santa Rita Hotel that used to be located at South Main and East 11th Streets in downtown Los Angeles, California. It is now a commercial building with mostly shops and has had the upper stories removed! When the guys moved to their new apartment for seasons three through six, the exterior shots were of an apartment building at West Dickens Avenue and North Clark Street in Lincoln Park in Chicago.

The opening sequence was changed in the third season and showed Larry and Balki on a tour boat cruising under a bridge on the Chicago river. On the opening sequence for the first three seasons of Family Matters there's a shot of the Winslows riding their bicycles over the same exact bridge!