CBS
Added to the database on April 27, 1999
Rate
(18 votes)
Cast & Characters | Broadcast History | Theme Song | DVDs | Watch Episodes | Photos | Trivia | Comments
One of the most successful television series ever, I Love Lucy is a sitcom starring Lucille Ball, Desi Arnaz, Vivian Vance, and William Frawley that ran from 1951 to 1957 on CBS. 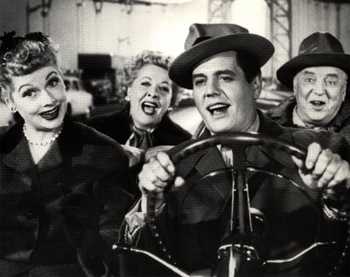 Lucy Ricardo is the wacky wife of Cuban bandleader Ricky Ricardo. Living in New York, (623 East 68th Street, Aprtment 3-B), Ricky tries to succeed in show business while Lucy -- always trying to help -- usually manages to get in some kind of trouble that drives Ricky crazy. Their best friends are Fred and Ethel Mertz, who are also their landlords. The two couples were almost inseparable, whatever the Ricardos did, so did the Mertzs. Usually, Ethel becomes Lucy's less-than-willing partner in crime. Ricky and Lucy welcomed little Ricky in 1953, whose birth was a national TV event. Later in the show's run, the Ricardos (and the Mertzes) moved to Hollywood, where Ricky tried to become a movie star.

Buy I Love Lucy On DVD

The "valentine" opening credits seen in syndication were *not* the original opening credits. When the series originally aired on CBS, the credits featured animated stick figures of Lucille Ball and Desi Arnaz along with the sponsor's product - Phillip Morris cigarettes, for instance. The "valentine" credits were added when CBS began rerunning the series in 1958.

This was one of the first TV shows to be filmed in Hollywood, at a time when many shows were done live in New York. It pioneered the use of three cameras simultaneously, and the results were high-quality prints of a classic comedy series preserved for future TV audiences.

When Lucy was pregnant with Little Ricky, network censors wouldn't permit her to say "pregnant." She had to say "expecting."

In the episodes when the Ricardos and the Mertzes are in Hollywood, the backdrop of Hollywood outside of the Ricardo's hotel suite replicates the view as it would be have been seen from the top of the stages at the Desilu lot on Cahuenga Boulevard (now Ren-Mar Studios), two blocks to the west of Vine Street where most of the "I Love Lucy" episodes were shot. Most of the landmarks at Hollywood and Vine that are on the backdrop (except for the Brown Derby Restaurant, which was demolished in the 1980's) may still be seen at that location today, over fifty years later. The Capitol Records Building was under construction when these episodes were being filmed and is not seen on the backdrop. The "Beverly Palms Hotel" was a fictional hotel, but its interior and exterior set designs combined elements of the Hollywood Plaza Hotel, the Hollywood Roosevelt Hotel and the Bevery Hills Hotel.

During the course of living in their New York apartment the Ricardo's had three different telephone numbers. The first was MUrray-hill 5-9975, the second was CIrcle-7-2099, and the third was MUrray-hill 5-9099. In actuality these numbers were unused telephone numbers of the New York Bell Telephone Company. When the numbers were entered in to service the Bell company would advice the shows producers and give them a new number to use. Murray Hill and Circle were also actual call names used in Manhattan at the time.

Although they slept in twin beds throughout the entire run of the series, during the first two seasons of the show, 1951-1953, Ricky and Lucy slept in twin beds that were pushed together in the same box spring. Once little Ricky was born CBS suggested that the beds be pushed apart to diminish the impact of the suggested sexual history of Lucy and Ricky. The only time we see the Ricardo's in two bed pushed together again is when they first move to the bigger apartment in the Mertz building, however, subsequently after that the beds are pushed apart again.
Tagged under:
Viewed 92208 times Last modified on March 18, 2017
back to top
« I Dream Of Jeannie I Married Joan »