NBC
Added to the database on October 10, 2008
Rate
(6 votes)
Cast & Characters | Broadcast History | Theme Song | DVDs | Watch Episodes | Photos | Trivia | Comments
Mad About You is sitcom that aired on NBC from 1992 to 1999 that stars Paul Reiser and Helen Hunt as a newly married couple in New York City. Reiser played Paul Buchman, a documentary film maker. Hunt played Jamie Stemple Buchman, a public relations specialist. Near the end of the show's run, the couple had a baby daughter, whom they named Mabel.
Jamie (Helen Hunt) and Paul Buchman (Paul Reiser) are a young urban couple with five months of marriage behind them and they're still trying to make some ground rules of living together in an apartment in Manhattan. This is definitely not easy because Jamie & Paul are both equally neurotic - but in totally different ways. Paul is a documentary filmmaker, he is charming and creative, but also extremely careful and analytic. Jaime works as a public relations consultant, and is more of a free spirit, but also has a number of discomforts. Jaime's sister Lisa Stemple (Anne Ramsay) often comes to visit them, just like their friends Mark Devanow (Richard Kind), his wife Fran (Leila Kenzle) and Paul's cousin Ira Buchman (John Pankow). But, they aren't the only ones dropping by the apartment - there are always all kinds of other characters like noisy neighbours, a funny dogwalker (Hank Azaria), family members and others. 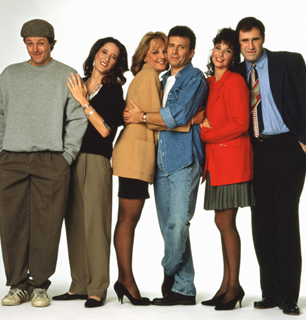 With a big part of personal intimacy, which Paul Reiser, the head character and the creator of the show, compares to "a ride home after a party, when a couple can finally tell each other what have they been thinking all night", the 30-minute show searches for capricious moments of every couple. Their co-creator of the show, Danny Jacobson, adds that "they wanted to set a mirror to marriage life and see how the world is behind closed doors".

{videobox}/media/video/madaboutyou.mp4{/videobox}
"The Final Frontier" by Don Was and Paul Reiser. Perfomed by Andrew Gold.

Mad About You On DVD

Mad About You Trivia

Paul Buchman worked as a documentary filmaker and his wife Jamie worked as a public-relations executive.

Lisa Kudrow played the twin sister, "Ursula Buffay" of her "Friends" character, "Phoebe Buffay" on close to two dozen episodes of Mad About You. Then, on episode #16 of Friends titled, "The One With Two Parts - Part 1", Jamie saw Phoebe at the gang's coffee house and mistook her for Ursula.

That wasn't the only crossover episode involving Mad About You characters. In episode #8 of Mad About You titled, "The Apartment", Cosmo Kramer (Michael Richards' character on "Seinfeld") was subletting his apartment from Paul Buchman. When Jamie found out that Paul hadn't given up the apartment, she told him to get over there and get Kramer to take over the lease.

Episode #7 of Mad About You titled, "Token Friend" was inspired by a real-life experience. Actor Steve Buscemi guest stars on that episode. In real-life, he tried out being a stand up comedian, before becoming an actor. He was doing so badly one time that they took him off stage before his gig was done and replaced him with another comic. That comic was Paul Reiser. Steve Buscemi is doing fine, however, as a very, very busy actor. You might know him best as the recurring character, "Tony Blundetto" on the TV series, "The Sopranos".

A character in one of the episodes asked Paul and Jamie if they had seen that movie where aliens burst out of people's chests (referring to the Alien movies). Paul responds by saying that he only saw the first one. This was an inside joke referring to the fact that Paul Reiser had starred in the second Alien movie.

The piano player for the theme song was none other than Paul Reiser himself!

Paul Buchman and Jamie Stemple (later Buchman) met while trying to buy a copy of the New York Times Sunday paper at a newsstand.

Mabel Buchman, Paul and Jamie's daughter, got her name in a pretty cool way! Mabel's grandmother (played by Carol Burnett of the "Carol Burnett Show") said that "Mothers always bring extra love". If you make an acronym out of that sentence, it spells, "M.A.B.E.L."!

Actress Teri Hatcher lost the role of Jamie Buchman to Helen Hunt at the final Mad About You auditions. If she'd have gotten that role, who might have played "Lois Lane" on the series, "Lois and Clark"?

As a wonderful surprise for the viewers who hated to see the series end, the final episode's story line in May of 1999 was told from the viewpoint of a "grown-up" Mabel, Paul and Jamie's daughter! We learned that in the future: 1999 - Paul and Jamie will discover that they are not legally married! 2005 - Jamie becomes pregnant again but loses the baby. 2021 - Paul and Jamie break up (but they eventually reunite and live happily ever after). Undisclosed Years: Fran and Mark re-marry, Ira marrys and has eight children, It is discovered that Maggie and Hal were British spys, Marvin becomes an international wrestling champion called "Angry Tina" and Debbie and Joan get married in Hawaii!