ABC, CBS
Added to the database on December 11, 2009
Rate
(8 votes)
Cast & Characters | Broadcast History | Theme Song | DVDs | Watch Episodes | Photos | Trivia | Comments
The Danny Thomas Show (known as Make Room for Daddy during the first three seasons) is a sitcom which ran from 1953 to 1957 on ABC and from 1957 to 1964 on CBS th followed the misadventures in the lives of the Williams family.
Danny Williams, a nightclub entertainer, (a character almost identical to that of Danny Thomas himself) tries to strike a balance between family life and the entertainment business. In the beginning the family consisted of his wife, Margaret (played by Jean Hagen,) his 11-year-old daughter, Terry (played by Sherry Jackson) and his 6-year-old son, Rusty (played by Rusty Hamer.) In 1956, however, Jean Hagen quit the show and Danny Thomas decided to continue on without her. Her character was written out as having herself died and Danny was now a widower. The next season (1956-1957) featured Danny dating various other women with plenty of input from the kids. Finally he proposed to Kathy O'Hara, a young nurse. The 5th season opened with Danny and Kathy returning from their honeymoon. Also joining the cast was Linda (played by Angela Cartwright,) Kathy's 5-year-old daughter by a previous marriage. 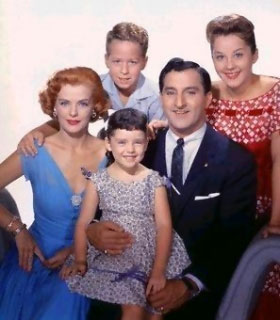 In 1958, Sherry Jackson left the show and the character of Terry was temporarily written out of the show as being away at school. Terry returned, however, in 1959, this time played by actress Penny Parker. Terry spent the next season being courted by nightclub entertainer Pat Hannigan (played by Pat Harrington Jr.,) whom she eventually married. Her character then left the show for good in 1960. There were also many other regulars, including Danny's Uncle Tonoose (played by Hans Conried,) Danny's agents at various times (played by Horace McMahon, Jesse White & Sheldon Leonard) and many more. Annette Funicello also spent a season as a regular when she was cast as Gina Minelli, an Italian foreign exchange student.

In 1957, the show switched networks from ABC to CBS. After the switch, the show finally got the ratings it deserved. Also of note, this show spawned a classic hit series; the episode 'Danny Meets Andy Griffith' was the pilot for The Andy Griffith Show. Also, such guests as Bill Dana and Joey Bishop got their own shows after appearences on The Danny Thomas Show. Bill Dana reprised his role from The Steve Allen Show, and NBC gave him his own show The Bill Dana Show in 1963 and it lasted until 1965. Joey Bishop got "The Joey Bishop Show", which aired on NBC, then CBS. It lasted from 1961 to 1965.


Make Room For Daddy / The Danny Thomas Show On DVD

The name for the series originated from Danny Thomas' real life. When he would return from performing "on the road", his children would have to move to different bedrooms to "Make Room For Daddy".

In 1956 Jean Hagen quit the series. Instead of replacing her with a new wife, Danny wrote her out of the scripts by explaining that she had died. During the fourth season, the show took on a kind of "Courtship of Eddie's Father" twist as Danny spent time dating women (often with the help of his kids) in an attempt to find himself a new wife and a new mother for the children. In 1957, Danny was successful in his quest and Margjorie Lord joined the cast. Unfortunately, the wedding did not take place on the air. When the fifth season began, Danny and Kathy were just returning from their honeymoon (along with Kathy's daughter from a previous marriage).

Sherry Jackson left the show in 1958. First her disappearance was explained by having her "away at school". Then in 1959, Penny Parker replaced her in the same role. Apparently enough time had passed for viewers to accept a different actress as Terry Williams.

Danny had several agents during Make Room For Daddy's run. Most interesting was Sheldon Leonard's role as his agent because Leonard was the "real-life" producer of "Make Room for Daddy". He had also appeared in some 1953 episodes as Danny's Masseur.

Another actor who played several different roles during the series run was Hans Conried. While his best-known role was "Uncle Tonoose", he also portrayed "Cousin Carl", "Uncle Oscar" and "Derrik Campbell".

Five years after the series ended, Danny Thomas starred on another series titled, "Make Room For Grandaddy". Kathy (Marjorie Lord), Rusty (Rusty Hamer) and Linda (Angela Cartwright) also returned for that show along with a new character (Terry's son) who made Danny a "Grandaddy".