NBC
Added to the database on September 29, 1999
Rate
(22 votes)
Cast & Characters | Broadcast History | Theme Song | DVDs | Watch Episodes | Photos | Trivia | Comments
CHiPs is a drama series that aired on NBC from 1977 to 1983 that followed the lives of two motorcycle police officers of the California Highway Patrol, Baker and Ponch. 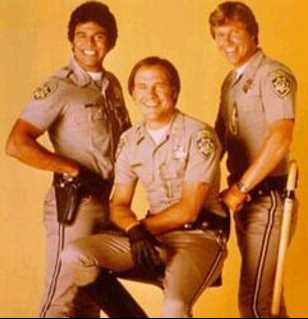 Jon and Ponch never once pulled a weapon on anyone during the entire series!

After CHiPs new episodes left the air, the show went into syndication and was called, "CHiPs Patrol".

Erik Estrada's character was originally supposed to be of Italian descent with the name Poncherelli. When Estrada was cast, they simply changed the last letter to an "o".

Randi Oakes joined the CHiPs cast in the third season. In episode #35 (2nd season), however, she first appeared on the series as a car thief named Kim! Randi was a top fashion model before becoming an actress. She didn't remain in showbiz long after CHiPs ended but it was a delight to see her on 3 episodes of "Fantasy Island" and 2 episodes of "The Love Boat"!

Erik Estrada actually got in an extremely serious motorcycle accident while filming one episode but, thankfully, he recovered!

The chase scenes and multi-vehicle crashes were filmed on freeways that were under construction but almost finished.

There was an actor in the pilot episode named Jonathon Baker! That was the nephew of CHiPs' creator, Rick Rosner. Jonathon played a little boy that the guys stopped for riding his bicycle on a highway. And, of course, he was also the source of Larry Wilcox's character's name!

In order to keep production costs down, the patrol cars used on CHiPs were used ones that they bought at auctions. If you know your cars, you'll see that they are always 3-5 years older than the date that the episode was produced.

Erik Estrada has somewhat remained in the public eye over the years but people often ask, "What happened to Larry Wilcox". Well, as of August 2006 Larry has had 19 credited roles on television since leaving CHiPs. He formed a company called "Wilcox Productions" which produced "The Ray Bradbury Theater", and the TV movie, "Death of a Centerfold: The Dorothy Stratten Story". In the mid-1990s Larry ran a pharmaceutical company called "Team Elite". Today Larry continues running Wilcox Productions and is also president of MediaCore, a software company.