NBC
Added to the database on September 24, 2008
Rate
(19 votes)
Cast & Characters | Broadcast History | Theme Song | DVDs | Watch Episodes | Photos | Trivia | Comments
Cheers is a sitom that ran for 11 seasons on NBC from 1982 to 1993. The show is set in the Cheers bar (named for the toast "Cheers") in Boston, Massachusetts, where a group of locals meet to drink, relax, chat and have fun. The show's theme song, written and performed by Gary Portnoy, and co-written with Judy Hart Angelo, lent its famous refrain, "Where Everybody Knows Your Name", as the show's tagline.
Sam Malone, a former relief pitcher for the Boston Red Sox, owns and runs Cheers, a cozy bar in Boston. Somewhat snobby, beautiful and intelligent Diane Chambers - forced to become a waitress when her fiance jilts her - constantly bickers with Sam. Eventually, they fall in love. Several wacky characters make the bar their home-away-from-home, including sarcastic waitress Carla, beer-loving accountant Norm and know-it-all letter carrier Cliff. A few seasons later, Sam sells the bar to buy a boat and sail around the world. But his boat sinks and he returns to bartending. Rebecca Howe, the new (more ambitious) manager, hires him back. They love to hate each other and eventually get together as well. 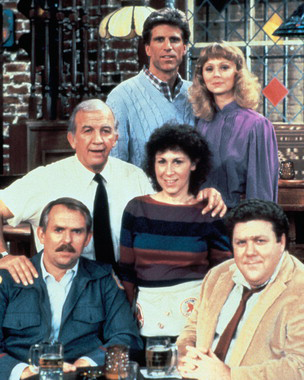 {videobox}/media/video/cheers.mp4{/videobox}
"Where Everybody Knows Your Name" by Judy Hart Angelo and Gary Portnoy, sung by Gary Portnoy

Sam Malone was originally supposed to be a retired football player on the TV show, but when the tall thin Ted Danson was cast for the role, they changed it to a retired baseball player.

The stage at Paramount studios where the series' episodes were shot is the same one where the spin-off series "Frasier" is now filmed.

Remember the episode where Sam & Diane stop their wedding ceremony at the last minute? In order to keep that ending a secret, they shot a different ending in front of the studio audience where they actually got married. This deception was to hide the fact that Shelly Long was leaving the Cheers cast.

In the episode "The Stork Brings a Crane", Woody checks into what the bar was before it was a bar and finds out that it was a House of Ill Repute.

The scenes shot of the outside of the bar were actually the "Bull and Finch Pub" in Boston.

Norm and Cliff guest-starred on an episode of the TV show "Wings". They took Sandpiper Air to go on a fishing trip but ended out spending all their time in bars.

Cheers was nearly cancelled in its first season.

There were 3 bachelor party episodes on the TV show and all of them had something happen which brought them to an abrupt end! Sam's ends when Shelley Long (as the girl in the cake) throws cake in Ted Danson's face and storms out mad! Frasier's ends when he discovers that the stripper is one of his patients! Fitz's (Cliff's prospective father-in-law) ends when Fitz dies (not much point in going on, huh?)

Towards the end of the final Cheers episode, Sam straightens a crooked picture of an American Indian. This was a tribute to cast member Nicholas Colasanto who played the role of "Coach" till his death in 1985. The picture belonged to Colasanto and meant a lot to him.

George Wendt (Norm) and John Ratzenberger (Norm) sued in 1982 because the Producers of the TV show put robots that George and John claimed resembled them at a chain of Cheers themed airport bars without their permission.
Tagged under:
Viewed 50011 times Last modified on March 18, 2017
back to top
« Charlie's Angels CHiPs »