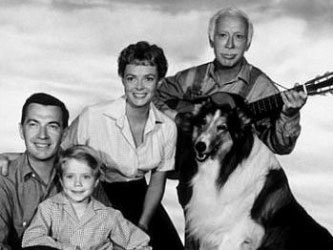 The show's first ten seasons follow Lassie's adventures in a small farming community. Fictional eleven-year-old Jeff Miller, his mother, and his grandfather are Lassie's first human companions until seven-year-old Timmy Martin and his adoptive parents take over in the fourth season. When Lassie's exploits on the farm end in the eleventh season, she finds new adventures in the wilderness with a succession of United States Forestry Service workers. After traveling without human leads for a year, Lassie finally settles at a children's home for her final two syndicated seasons.

Lassie found critical favor from its début and won two Emmy awards in its first years. Stars Jan Clayton and June Lockhart were nominated for Emmys. Merchandise produced during the show's run included books, a Halloween costume, clothing, toys, and other items. Campbell's Soup, the show's life-long sponsor, offered two premiums (a ring and a wallet), and distributed thousands to fans. A multi-part episode was edited into the feature film, Lassie's Great Adventure and released in August 1963.

The Lassie TV show was based on the 1938 short story in the Saturday Evening Post written by Eric Knight. Then, in 1940, Mr. Knight followed up with a best-selling novel also titled, "Lassie". In those stories, Lassie was owned by a poor family who was forced to sell her. Then Lassie had to find her way back to them despite many obstacles.

There was also a Lassie radio program from 1947-1950 and several movies and other TV shows (see bottom of this page for more details).

Ken Osmond who played "Eddie Haskell" on the series, "Leave It To Beaver (1957)", guest-starred on the very first episode of "Lassie". Twelve and one-half years later, he guest-starred again on episode #435, "A Matter Of Seconds".

Most of us from that era remember June Lockhart as Timmy's "steadfast" mother (or later as the same type of mother on "Lost In Space"), but in real-life, she was a real human-being. She got fired as the co-host of the "Miss U.S.A. Pagent" for "living in sin" with a much younger man. A real scandal in those days! June's interest in Space Exploration resulted in her often appearing at events with astronauts! Her daughter June appeared on the series, "Petticoat Junction (1963)" in the role of Doctor Janet Craig - one of the first female doctors seen on television!

Tommy Rettig was chosen from more than 500 auditioners to get the part of Jeff Miller, Lassie's first TV master! That was probably the high point in his otherwise troubled life. Tommey got very few adult acting jobs and otherwise experienced the same "let-down" of many child actors. After a drug conviction, bankruptcy and divorce, he died at the young age of 55. In his final years, however, he became a well-known and respected Software Developer. He was considered an expert in Dbase and FoxPro applications.

After Lassie, Jon Provost (Timmy) went to college at Sonoma State University. He sold real estate for a while and then worked in business development.

George Cleveland is possibly best remembered today in his role on Lassie as "Gramps". He had, however, by that time already accumulated 50 years of entertainment credits. Starting on the stage and in vaudeville, he also acted on several radio programs and approximately 150 movies! Remarkably, his only other appearance on a TV series was a guest-starring role on one episode of "The Adventures of Wild Bill Hickok (1951)" where he also played a grandpa!