NBC, CBS
Added to the database on October 12, 2009
Rate
(13 votes)
Get Smart is a comedy series that satirizes the secret agent genre that aired on both NBC and CBS from 1965 to 1970. Created by Mel Brooks with Buck Henry, the show starred Don Adams (as Maxwell Smart, Agent 86), Barbara Feldon (as Agent 99), and Edward Platt (as Chief).
The right show at the right time, Get Smart brilliantly spoofed the spy genre that was all the rage in 1965, with James Bond on the big screen, and such series as Danger Man, The Avengers, The Saint, The Man from U.N.C.L.E., and I Spy more or less playing it straight on the small screen. Get Smart, on the other hand, had a license to kill…with laughter. Mel Brooks and Buck Henry created one of TV's all-time greatest characters, Maxwell Smart, Agent 86 of CONTROL, the super-secret agency vigilantly on alert against the forces of KAOS, an organized crime outfit dedicated to evil. 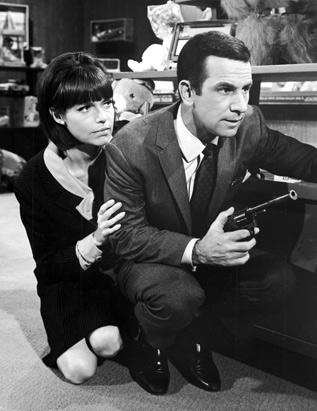 Smart (Don Adams in his iconic, Emmy-winning role), an American Clouseau, was not stupid. Totally inept as a secret agent, Smart could barely use the gadgetry the agency provided him (including a phone embedded in his shoe). Though all evidence to the contrary, he was, in his own mind, a suave and sophisticated spy, albeit one who would inadvertently lean against a freshly painted wall while shadowing an enemy agent. Get Smart hilariously demoralized the business of espionage. Agents punch a time clock and dispute vacation time. Cool spy gadgets, such as the infamous Cone of Silence, are prone to malfunction. Agent 99 is Smart's smarter partner, a resourceful agent who later married her bumbling cohort. Smart and Agent 99's boss is a man known only as The Chief. With Get Smart, you will be witness to some of TV's funniest moments, sharpest writing, and expertly-executed physical comedy. And… loving it.

Get Smart On DVD


View all Get Smart DVDs, books, merchandise and collectibles from Amazon.com

Don Adams was a United States Marine during World War II. He got Malaria during the fighting in Guadalcanal. His TV career started when he won the competition on the TV show, "Ted Mack's Amateur Hour".

The "Cone of Silence" was a device that was suppossed to guarantee privacy so that agents could tell each other secrets with no chance of being overheard. Of course, it never worked! It appeared in only nine episodes.

Barbara Feldon appeared as a contestant on the "$64,000 Question" quiz show and actually won the entire $64,000! That was a huge sum of money in those days! Her question category was "Shakespeare".

Bernie Kopell came to the show in the 2nd season as Maxwell Smart's evil rival "Siegfried". You might know Bernie better as "Doctor Bricker" on the show "Love Boat".

Robert Karavelas played the role of "Larabee" on the show. In real life, he was Don Adams' cousin.

Contrary to popular belief, Agent 99's real name is never revealed. In episode #79, "99 Loses CONTROL", she states that her name is Susan Hilton, but at the end of the episode, she tells Maxwell Smart, "Susan isn't my real name."

"KAOS" and "CONTROL" are not acronyms. They don't mean anything. Think of it like this: There would be "chaos" in an evil world. A good world is where evil is "controlled."

The Chief's first name on the TV show was "Thaddeus". His cover name was "Harold Clark". He had no agent number like "86" or "99" because he became an agent before they assigned numbers.

NBC decided to cancell the show at the end of the fourth season. CBS picked up the show and got a ratings increase (for a short amount of time) by announcing that Agent 99 was going to have a baby (which ended out being twins).