NBC
Added to the database on May 19, 2009
Rate
(20 votes)
Cast & Characters | Broadcast History | Theme Song | DVDs | Watch Episodes | Photos | Trivia | Comments
Dragnet is a radio and television crime drama about the cases of a dedicated Los Angeles police detective, Sergeant Joe Friday, and his partners. The show takes its name from an actual police term, a "dragnet", meaning a system of coordinated measures for apprehending criminals or suspects.
Spanning over three decades of television, Dragnet is probably the most successful police dramas in television history. The program opened each week with these words from Det. Sgt. Joe Friday: "This is the city, Los Angeles, California. I work here, I carry a badge." Then the unforgetable arresting theme music began to play ("Dum-de-dum-dum"). Dragnet's hallmark was its appearance of realism,from the documentary-style narration by Joe Friday, to the cases drawn from the files of the real L.A.P.D., to its attention to the details of police work ("It was 3:55. . .We were working the day watch out of homocide"). Viewers were reminded of the unglamorous dead ends and the constant interruptions of their private lives that plague real policemen, and this made the final shoot-out and capture of the criminal all the more exciting. At the end of each episode, after the criminal was apprehended, an announcer would describe what happened at the subsequent trial and the severity of the sentence. 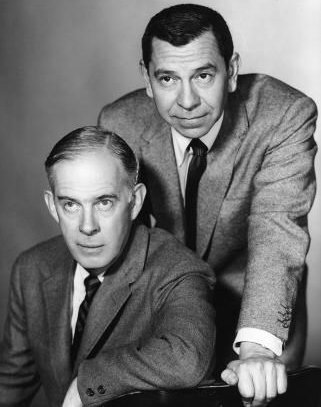 The series was created and directed by Jack Webb himself. It's catchphrases and devices became national bywords and were widely satirized. There was Webb's terse "My name is Friday--I'm a cop," and "Just the facts, ma'am" It was revived in 1967 as Dragnet 1967 and again in 1989 as "The New Dragnet". This was followed by a short-lived revival in 2002 with Ed O' Neill as Joe Friday. The series was renamed L.A. Dragnet in 2003 and canceled shortly thereafter. A theatrical film in 1987 with Dan Ackroyd and Tom Hanks also surfaced. Other spinoffs included Adam-12 (1968-75) and Emergency (1972-77).

Jack Webb was the creator, star, and executive producer of Dragnet. His main concern was that the show would follow the real-life daily duties of police detectives. He insisted that the step-by-step work involved in an investigation and arrest by accurately shown.

George Fenneman (Groucho Marx's sidekick on “You Bet Your Life (1950)”) read the opening narrative (see below) on this series and the radio version of Dragnet. Hal Gibney read it for the 1967-1970 series.

The Dragnet TV show premiered two years after the 1949 premiere of a Dragnet radio show. That radio series ran until 1957 so both versions of Dragnet aired concurrently from 1951 to 1957! Jack Webb also played Joe Friday on the radio series but his "sidekick" was played by Barton Yarborough who also appeared on this TV series but not as Friday's partner.

When Dragnet was shown in reruns, it was titled, "Badge 714". That was Joe Friday's badge number.

Eight years after this version of the Dragnet TV show ended, it returned in 1967 for another three season run, ending in 1970. Only Jack Webb and Harry Morgan returned from the original cast. In 1989, Dragnet returned to television once again. While the storylines remained pretty true to the Dragnet format, the entire cast was, of course, different with Jeff Osterhage and Bernard White playing the two plainclothed police detectives. By 1989, however, there were new police series with more excitement like the "Cops TV Show" or "America's Most Wanted" for viewers who wanted to see police officers in action.

For its first 22 episodes, Dragnet was only on the air every other week. It shared its time slot with another police series that started on the radio. Its title was, "Gangbusters".

The first episode of the Dragnet TV show, "The Human Bomb", actually appeared as a preview on a series titled, "Chesterfield Sound Off Time".