ABC
Added to the database on June 26, 2009
Rate
(24 votes)
Cast & Characters | Broadcast History | Theme Song | DVDs | Watch Episodes | Photos | Trivia | Comments
Charlie's Angels is a crime drama series about three women who work for a private investigation agency, and is one of the first shows to showcase women in roles traditionally reserved for men. The show aired on ABC from 1976 to 1981.The
Once upon a time, there were three little girls who went to the police academy. And they were each assigned very hazardous duties but I took them all away from all that and now they work for me. My name is Charlie. Those famous words were heard every week from 1976 to 1981 during Charlie's Angels 5 year run. This ABC crime series began in September of 1976 introducing three stunning, sexy and young former policewoman, private detectives working for the Charles Townsend Detective Agency. The wealthy Charlie Townsend, voiced by John Forsythe, was their never-seen boss, who relayed assignments via a speaker telephone. The trio of Angels featured Sabrina Duncan; (Kate Jackson) the "cool, smart, multilingual leader," Jill Munroe; (Farrah Fawcett-Majors) the "athletic angel" and finally Kelly Garrett; (Jaclyn Smith) the "street wise angel." The Angels worked with their trusty male counter-part, John Bosley played by (David Doyle). 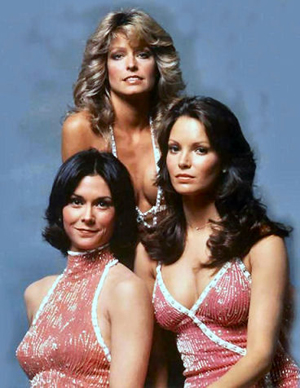 The poor office staff for the Charlie's Angels TV show had to deal with as many as 18,000 fan letters each week!

The producers of Charlie's Angels originally wanted a blonde, a redhead and a brunette for the ladies on Charlie's Angels but they were so impressed with Kate Jackson and Jaclyn Smith's auditions that they happily did without the redhead.

The actor who was first hired to provide the voice of Charlie was fired early on when he showed up drunk for work. John Forsythe was practically begged to take the job and he eventually agreed.

Even if you never saw Charlie's Angels, you still may be familiar with some of John Forsythe's other work (where he actually appeared on screen) including starring roles on other TV shows including, "Bachelor Father (1957)", "The John Forsythe Show" (1965), "To Rome With Love (1969)" and "Dynasty (1981)".

Aaron Spelling owed Robert Wagner some money for a previous business deal and talked the very reluctant Wagner into accepting a 45% ownership of the Charlie's Angels TV show as payment. Wagner stated that the idea of a show where three small, young women kicking tough guy's butts was the worst idea he'd ever heard! Obviously, he was eventually very happy he took the deal!

Charlie's Angels was the only immediately obvious hit of the 1976-77 season. By the end of the season, 59% of all TV viewers were watching the show in its time slot. It stayed in the Nielson ratings "Top Ten" for the first three seasons.

Jill Monroe's hairstyle became such a hit with Charlie's Angels female viewers that a huge number of them changed to what became popularly known as "Farrah Fawcett Hairdos".

Charlie's Angels was the first TV show to get more than $100,000 per minute for advertising.

Farrah Fawcett appeared in Playboy magazine in December of 1978 (not nude) and then took it all off at age 48 in December of 1995. Tanya Roberts also did Playboy in October of 1982 after Charlie's Angels was cancelled.

Charlie's Angels was originally going to be about three lady cops and would be called "Alley Cats". Kate Jackson came up with the idea of making the ladies detectives instead of cops. She also recommended that the series be named, "Harry's Angels", and that Harry should never be seen and would only be heard on the telephone. All of her suggestions were used except that "Harry's Angels" was changed to "Charlie's Angels". The only reason that was changed was because there was alread a series titled, "Harry O" and the producers didn't want any confusion with or misconceptions about their new show. Kate Jackson's great instincts for what would work and what wouldn't later got her fired from Charlie's Angels for continuously griping about how terrible the scripts were. We'll never know how many more seasons Charlie's Angels may have run if they'd listened to Kate.

Charlie's Angels had nearly no competition from the shows in its time slots on CBS and NBC for the first three seasons. When the series began in the 1976/1977 season, it was up against "The Blue Knight" on CBS and "The Quest" on NBC. The Blue Knight only survived for four episodes and The Quest was gone after eleven episodes. For Charlie's Angels' second and third seasons, it quickly killed off another series titled, "The Oregon Trail". Otherwise, CBS and NBC just ran movies against the Charlie's Angels dynamo. In November of 1978, the series finally got some competition from NBC with "Diff'rent Strokes" running during Angels' first half-hour. In its final season, Charlie's Angels was moved to Sunday nights against "Archie Bunker's Place" and "One Day at a Time" on CBS and "CHiPs" on NBC.