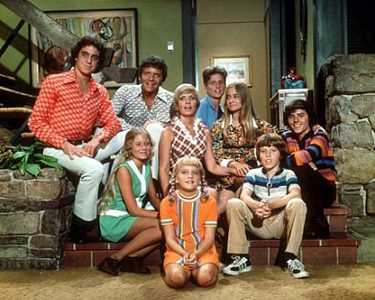 Here's a story ... of a man named Mike Brady, an architect widower with three sons: oldest Greg, middle son Peter and youngest Bobby. He meets and marries a widow (or a divorcee - it depends on whom you ask), Carol, with three daughters of her own: oldest Marcia, middle girl Jan and little one Cindy. Tending to them is a wacky maid named Alice, who all live in a four-bedroom, two-bathroom house in the Los Angeles suburbs. The story lines dealt with boy problems, sharing bathrooms (ones without a toilet, no less), lost hampsters, the occasional football to the nose and attempts at pop music stardom.

Buy The Brady Bunch On DVD

The Brady Bunch is currently not available to stream online.

Oscar-winning actor "Gene Hackman" was in the running for the role as "daddy", Mike Brady. It's hard to imagine today but, in 1969, the producers felt that they wanted someone that the audience would be familiar with and Gene just wasn't that well known yet!

Robert Reed and Florence Henderson were already stars in their own right when cast for the Brady Bunch. They were extremely gifted singers, actors, and dancers but with little experience with comedy. Robert Reed accepted his role reluctantly, probably due mostly to the size of the paycheck he was offered. Very few people expected the Brady Bunch TV show to last very long. When it was renewed for a 2nd, 3rd, 4th, and 5th season, Reed became increasingly unhappy playing his funny man role.

Both Reed and Henderson were happy when the Brady Bunch resulted in a "spinoff series" titled, "The Brady Bunch Hour". It was a musical variety series that allowed them to showcase their singing and dancing skills! Unfortunately, all of the Brady kid actors and actresses absolutely hated the show! They didn't have to suffer long as that series only survived eight episodes.

Barry Williams (Greg Brady) quickly became a teen heartthrob. By the end of the second season, he was getting 6,500 fan letter per week, mostly from teenage girls! Maureen McCormick (Marcia Brady) also became very popular with teenage boys and many young girls wanted to be strong and confident just like Marcia.

The Brady Bunch was a perfect example of how child actors find it very difficult to transition into new "older" roles as they age. Despite the huge popularity of the Brady Bunch, not one of the child actors was able to establish a significant career as an adult actor! To make matters even worse, not even either of the two Brady "spinoff series" where they played older versions of their original roles lasted more than ten episodes!

Brady Bunch fans often saw a barbecue grill in the Brady's backyard. They only actually fired it up once in episode #63 titled, "Do Re Mi".

Maureen McCormick started in show business at the young age of six as a result of winning the "Baby Miss San Fernando Valley" beauty pageant. She then starred in many commercials including Mattel and Kool-Aid. She also got small roles on early episodes of "Bewitched" and "My Three Sons" and finally, the starring role as Marcia Brady on The Brady Bunch!

The Brady Bunch obviously needed a large home to hold eight people! Their house had ten rooms plus an attic which was huge for the 1970s! There were four bedrooms and just two bathrooms.

It was not easy for the kids to land roles on the Brady Bunch! A total of 464 young actors and actresses auditioned for those six roles!

Nearly every TV series makes a few blunders and the Brady Bunch TV show was no exception. On one episode, Alice walked through the back door in the Bradys' kitchen and she was in her room. On another episode, that door led to the laundry room. In yet a third episode, it led to the backyard!