ABC
Added to the database on October 10, 2008
Rate
(18 votes)
Cast & Characters | Broadcast History | Theme Song | DVDs | Watch Episodes | Photos | Trivia | Comments
Home Improvement is a sitcom starring Tim Allen that aired on ABC from 1991 to 1999. In the 1990s, it was one of the most watched sitcoms winning many awards. The show's title refers to physical improvement of houses, as well as to improving life with family, friends, work, and school.
There's no more reliable engine for comedy than the differences between men and women; Home Improvement puts that topic front and center. Launched from the stand-up comedy of Tim Allen, this sturdy sitcom rests on the endearing, befuddled machismo of Tim Taylor (Allen), the host of a how-to-build-stuff show called Tool Time, who finds raising three sons and being a supportive husband isn't always as easy as sanding down a door frame. In the show's first season, the tried-and-true domestic plotlines (for example: wife wants to have a romantic dinner, husband wants to watch the big game--the fodder of every family sitcom since the dawn of television) are given a fresh spin by Home Improvement's embrace (and gentle mockery) of the men's movement that flourished in the early '90s. 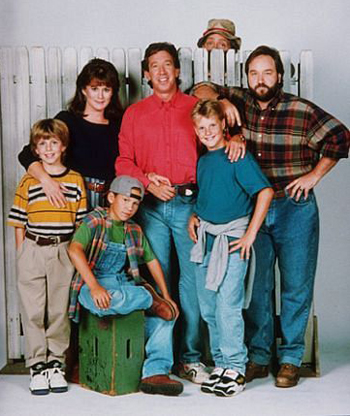 Tim's neighbor Wilson (Earl Hindman), whose face is always obscured by the fence between their yards, proves to be a font of Iron John-style wisdom--wisdom that Tim comically garbles when he puts it into practice. Allen and Patricia Richardson (as Tim's prickly but tolerant wife, Jill) immediately established a cozy but smart banter with enough bite to rise above the bland bickering of too many sitcoms. Some jokes degenerate into schtick--Tim's manly grunting becomes rote by the second episode--but Allen and his writing team consistently found surprises in this familiar territory. The capable supporting cast also includes Tim's sensitive and woefully single assistant Al (Richard Karn), his three cute sons (Jonathan Taylor Thomas, Zachery Ty Bryan, and Taran Noah Smith), and Tool Time's eye-candy (future Baywatch sex bomb Pamela Anderson).

One novel aspect of the Home Improvement TV show was that the studio audience was also the audience you saw during the "Tool Time" segments!

Patricia Richardson came from a military family. Her father was a jet fighter pilot and a test pilot for the Navy! Her father's father was an Admiral in the Navy and her mother's father was a Marine Corps General! Patricia was born at the Bethesda Naval Hospital in Maryland and grew up at her father's many assignments all over the world! She was nominated for 2 Golden Globe Awards and 4 Emmys for her role as Jill Taylor on Home Improvement. There were a few slow years for Patricia after the series ended and then she landed the role of "Dr. Andy Campbell" on the series, "Strong Medicine"! At the time of this writing (2008), she's filming a movie titled, "Lost Dream".

Tim Allen would often wear t-shirts and sweaters with college logos on them when colleges from Michigan would send them to him.

Remember Wilson on Home Improvement? Tim's neighbor whose face was never shown? Tim Allen based that character on one of his childhood neighbors. You see, Tim was so short at that time that he couldn't see over the fence between his yard and the neighbor's house. Wilson was portrayed by Earl Hindman. Comically, Hindman would come out with the rest of the Home Improvement cast for curtain calls, but he'd hold a miniature picket fence in front of his face! Actually, audiences did finally get to see Wilson's face during the curtain call on the very last episode.

Did you realize that Richard Karn's wife, Tudi Roche, appeared on five episodes of the Home Improvement TV show? She played the role of Jill's sister Carrie. The episodes she appeared in (below) were #98, 104, 134, 150, and 179.

Anytime a corporate logo was seen on Home Improvement, it was covered over with the letters "WLS" which is ABC's affiliate station in Chicago, Illinois.

In episode #151, "The Kiss & the Kiss-Off", Pamela Anderson returned to Home Improvement to reprise her role as Lisa! Tim re-hired her as the Tool Time Girl without even mentioning it to Heidi, the current Tool Time Girl!

Tim Allen performed stand-up comedy for the first time at the Comedy Castle in Detroit, Michigan when a buddy dared him! His early routines mostly centered around the "Men are from Mars ... Women from Venus" type jokes and that was still evident in his role on Home Improvement.

Lisa the tool girl was originally meant to have been a major character on Home Improvement. Ashley Judd was originally awarded the role, but changed her mind after her agent convinced her that she had a shot at a career in the movies and did so mere days before the pilot was to have been filmed! The script was quickly re-written with Pamela Anderson ("Baywatch", "V.I.P.", "Stacked") starring in the diminished role.

During the series run, it was revealed that Tim had five brothers. Their names were Jeff, John, Marty, Rick, and Steve. Jill had four sisters named Carrie, Linda, Robin, and Tracy.