CBS
Added to the database on September 16, 2008
Rate
(27 votes)
Cast & Characters | Broadcast History | Theme Song | DVDs | Watch Episodes | Photos | Trivia | Comments
M*A*S*H is a medical-military-comedy series, adapted from the 1970 feature film MASH that follows a team of doctors and support staff stationed at the "4077th Mobile Army Surgical Hospital" in Uijeongbu, South Korea, during the Korean War. M*A*S*H's theme song featured an instrumental version of the song "Suicide Is Painless", which also appears in the original film.
Like the TV incarnation of The Odd Couple, the M*A*S*H series has supplanted the original film in the public's consciousness. Legendary comedy writer Larry Gelbart (Your Show of Shows) deserves a medal for developing Robert Altman's bloody, funny 1970 classic for television with much of its anti-establishment spirit intact. The first-season episodes--bracingly less politically correct than the shows in the final seasons--chart the program's sometimes bumpy evolution as it tried to remain true to the film's anarchic spirit while finding its own voice. 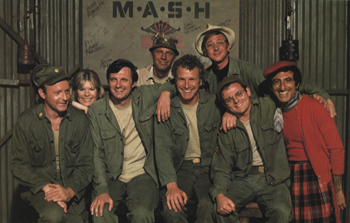 The most memorable episodes include "The Pilot," which establishes the characters in broad strokes; "Sometimes You Hear the Bullet," in which a friend of Hawkeye's (Alan Alda) dies on the operating table (look for "Ronny" Howard as an underage soldier); "Cowboy," in which someone is trying to kill clueless commander Henry Blake (McLean Stevenson); and the pivotal "Dear Dad," the first of what would be a series of multistory episodes in which Hawkeye writes to his father about life at the 4077th. It is interesting to note film characters who made early exits from the series, including Timothy Brown's Spearchucker and Karen Philipp's Lt. Dish (George Morgan, who plays Father Mulcahy in the pilot, we hardly knew ye). Klinger (Jamie Farr), bucking for his Section 8 discharge, doesn't appear until the fifth episode, "Chief Surgeon Who?" And Gary Burghoff's Radar is a much more wily and savvy partner in crime to "Yankee Doodle Doctors" Hawkeye and Trapper John (Wayne Rogers) than in later seasons. In its 11-year run, M*A*S*H earned 14 Emmy Awards, and it remains one of TV's most beloved series.

The only regular cast member who died on M*A*S*H was Colonel Henry Blake. He perished when the plane that was carrying him out of the war to return to the U.S. crashed.

The program actually lasted 8 years longer than the real Korean War did.

The character played by Wayne Rogers was "spun-off" into a program called "Trapper John, M.D. (1979)" and mentioned his time at the 4077th M*A*S*H unit on several episodes. The actor playing Trapper John in that series, however, was Pernell Roberts (star of the series, "Bonanza (1959)"), not Wayne Rogers. It lasted seven years!

M*A*S*H produced two more "spin-offs" titled, "AfterMASH" and "W*A*L*T*E*R". AfterMASH started the very next season after M*A*S*H ended. In it, Potter, Klinger, and Father Mulcahy work at a hospital in Missouri. It lasted barely over one year. W*A*L*T*E*R only made it to the pilot stage of production. The pilot was broadcast but the show was not picked up by any network. In that pilot, Walter "Radar" O'Reilly ends out a cop in St. Louis, Missouri.

Radar O'Reilly's first name was actually Walter. He was called "Radar" because he always seemed to know what was going to happen right before it did happen. He would say, "Incoming Choppers" before anyone heard anything. Then 15 seconds later, you'd hear them. He would also finish people's sentences for them as if he knew what they were thinking.

Long before he was Colonel Potter on the M*A*S*H TV show (approximately 20 years before), Harry Morgan had a regular cast member role on the TV show, "Dragnet (1951)". He played the role of Officer Bill Gannon ... Sergeant Joe Friday's partner.

The series was based on the movie with the same name from 1970, however in the movie, Donald Sutherland was Hawkeye Pierce and Elliot Gould was Trapper John. In fact, the only major character to appear in both was Gary Burghoff as Radar O'Reilly. Both the movie and the TV show were based on the experiences of Dr. Richard Hooker. He refused to watch the show because he was a die-hard conservative Republican and felt the show was ridiculously liberal.