ABC
Added to the database on June 10, 2015
Rate
(16 votes)
Cast & Characters | Broadcast History | Theme Song | DVDs | Watch Episodes | Photos | Trivia | Comments
F Troop was a comedy series set during the Civil War-era that aired on ABC from 1965 to 1967 about a Private who is given a field promotion to Captain and given command of Fort Courage. The problem is that he received his promotion because he accidentally "saved the day" when he led a cavalry charge in the wrong direction. This theme continues throughout the series as Captain Parmenter continually messes up but ends up on top. 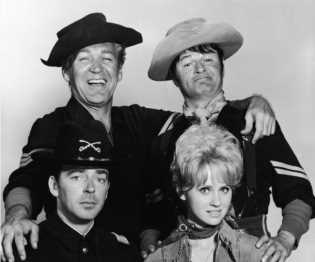 Though light on historical accuracy, 'F Troop' is heavy on slapstick humor and gags of all varieties. After accidently turning the tide in an America Civil War battle, private Wilton Parmenter (Ken Berry) is elevated to the rank of captain and made commanding officer of remote Kansas outpost Fort Courage. There, the naive commander is constantly duped by the scheming of his non-commissioned officers, Sergeant Morgan O'Rourke (Forrest Tucker) and Corporal Randolph Agarn (Larry Storch), who are in cahoots with local Indian tribe the Hekawis, engaging in illegal business dealings known as "O'Rourke Enterprises."

The end of the Civil War was near
When quite accidentally,
A hero who sneezed abruptly seized
Retreat and reversed it to victory.

His medal of honor pleased and thrilled
his proud little family group.
While pinning it on some blood was spilled
And so it was planned he'd command F Troop.
Where Indian fights are colorful sights
and nobody takes a lickin'
Where pale face and redskin
Both turn chicken.
When killing and fighting get them down,
They know their morale can't droop.
As long as they all relax in town
Before they resume with a bang and a boom
F Troop.
Watch opening intro:

Melody Patterson was only 16 when she auditioned for the part, not really expecting to get it. When she found out that she did indeed get it, she and her mother put off telling the show's producers her real age until just before shooting started.

Many viewers have thought that because "Old Charlie" the town drunk would usually be thrown through the saloon doors (or window), bounce off a support post, fall face forward over the hitching rail, spin around and land on his face or back in three episodes, he was actually a young stuntman in "old man" makeup. In reality "Charlie" was ace stuntman Harvey Parry, who at that time was 65 years old and had been a stuntman for almost 45 years.

The name of the tribe that Wild Eagle belonged to was the Hekawe. In one episode it was explained that the name came about by two Indians falling off a cliff and one asking "Where the heck are we?" The original name of the tribe, the Fugawe (As in, "Where the Fugawe?"), was rejected by network censors.

The names of Captain Parmenter's family all came from mythology. His first cousin was a major named Achilles (Greek), his second cousin was a lieutenant colonel named Hercules (Romanisation of Greek Herakles), his uncle was a colonel named Jupiter (Roman) and his father was a general named Thor (Scandinavian).

Chief Wild Eagle and the Hekawis often referred to Captain Parmenter as the "Great White Pigeon".

It is mentioned several times throughout the run of the series that Sergeant O'Rourke was a veteran of the Mexican War. However, it is not made clear as to whether or not he or Corporal Agarn fought in the Civil War.

Forrest Tucker, who here plays a cavalry sergeant named O'Rourke, played a cavalry lieutenant in Flaming Feather (1952). His sergeant was named O'Rourke.
Tagged under:
Viewed 35965 times Last modified on March 19, 2017
back to top
« Everybody Loves Raymond The Facts Of Life »