ABC
Added to the database on May 27, 2012
Rate
(15 votes)
Cast & Characters | Broadcast History | Theme Song | DVDs | Watch Episodes | Photos | Trivia | Comments
McHale's Navy was a war comedy series that aired on ABC from 1962 to 1966 about a misfit PT boat crew in the South Pacific during World War II. Their unmilitary antics repeatedly got them in trouble with their commander but he always ended out having to "look the other way" in the end because the crew typically stopped an enemy attack or prevented some other catastrophe. 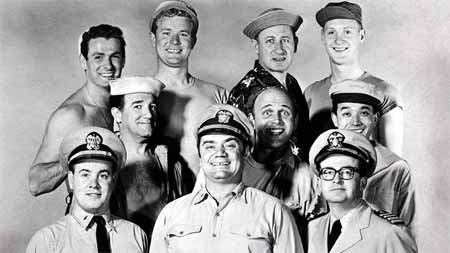 A Lively, Light-hearted Romp Through The Pacific Theater Of Operations An experienced South Pacific Sea Dog, by the name of Quinton McHale, was commissioned as a Lieutenant Commander into the U.S. Navy Reserve, at the start of World War II, and made the Skipper of the Torpedo Patrol (PT) Boat #73, stationed at the U.S. Naval Installation on the island of Taratupa, in the Southwest Pacific. Assigned to his command were 6 free-spirited, good-hearted Swabbies who loved to have fun, but who Though they usually ignored Navy regulations Did their jobs, and did them well, when duty called. The 73 ˜Family' included, among others, a con man and amateur Magician, a womanizing hunk, a dedicated Family man, a guitar-playing, moonshine-making Tennessee good ol' boy, and even a deserter from the Japanese Navy, who was an excellent cook.

When McHale's Navy was first conceived, it was projected as being a typical military series about fighting men during World War II. Then someone mentioned adding a comedy side to the war theme and the rest is history!

Tim Conway got his first big show business job as a regular cast member on the "Steve Allen Show" which became the "New Steve Allen Show" in its second season. A few years after those series ended, he got the starring role on McHale's Navy. Most people, however, probably remember Tim most fondly for his performances in skits on "The Carol Burnett Show". Tim would constantly ad-lib and cause the other cast members to "crack up" laughing on the show and audiences ate that up! Most series would have cut out those moments but they were funnier than the original scripts and really made for unforgettable TV moments! Tim has also been referred to as a "Disney Legend" for his fantastic roles in several Disney movies! Another title bestowed on him by other comedians is "The best second-banana in the business" due to his uncanny talent of making anyone who appears on the screen with him shine (from a comedy viewpoint).

Never has their been a series with more oddball characters than McHale's Navy. One of the main ones was Ensign Parker who wanted to be the perfect Naval Officer and do everything by the book but he just didn't have the wits or command enough respect to lead his men. Then there was Captain Binghamton who constantly tried to catch McHale's crew in one of their unauthorized parties, unlawful uses of military equipment, or any other thing he could come up with but the crew always outsmarted him in the end. The crew even had a Japanese deserter named Fuji who cooked and cleaned for them. He always wore a P.O.W. outfit so he wouldn't be shot if someone outside McHale's crew found him.

Ernest Borgnine is one of the few actors who have managed to be a TV star and movie star simultaneously. He won an Oscar and a Golden Globe award in 1956 for his legendary portrayal of a 34-year-old butcher who fears he'll never find love until he meets a woman in the same mindset. Many of us will never forget his wonderful role as the cop who leads everyone else to safety in the 1972 film, "The Poseidon Adventure". Mr. Borgnine also starred two other TV series titled, "Airwolf" and "The Single Guy". Amazingly, after 57 years of acting (as of 2008), Mr. Borgning is still going strong with 2 movies in 2007, three in 2008, and four in various stages of production for 2009!

On several episodes of the first season, a character would talk about PT-109 and its commander. They never actually used his name but PT-109 was the boat that was commanded by President John Fitzgerald Kennedy who was President of the United States at the time those episodes aired. Sadly, President Kennedy was assasinated shortly after the second season of McHale's Navy began.

The characters on McHale's Navy had the same thing happen to them in the last season that happened to many real life World War II fighting men as the war in Japan ended. They were transferred from the South Pacific to Vota Fiore, Italy.

McHale's Navy received Emmy nomination in 1963 and 1964 for "Outstanding Program Achievement in the Field of Comedy". In both cases, "The Dick Van Dyke Show" won.

The name of McHale's Navy base in the South Pacific was "Taratupa". That was also the name of the Island that the base was located on. The set for the base on Taratupa was a popular attraction for years at Universal Studios after McHale's Navy ended.