CBS
Added to the database on September 8, 2008
Rate
(14 votes)
Cast & Characters | Broadcast History | Theme Song | DVDs | Watch Episodes | Photos | Trivia | Comments
Gomer Pyle, U.S.M.C. is a sitcom that originally aired on CBS from 1964 to 1969. The series was a spinoff of The Andy Griffith Show, that featured Gomer Pyle's trails and tribulations in the military.. The show ran for five seasons and a total of 150 episodes.
Golll-eeeee! The '60s' favorite TV country bumpkin, Gomer Pyle, won the hearts of viewers on The Andy Griffith Show, and spun off in to his own wildly popular series, Gomer Pyle U.S.M.C.. As the eternally cheery and clueless Gomer, Jim Nabors gives a comic tour de force performance as a newbie Marine under the command of the short-tempered Sgt. Carter, played with demonic fervor by Frank Sutton. Are Pyle and Sgt. Carter bitter foes or comedic sidekicks? "Surprise, surprise, surprise"--the secret to their chemistry was that the actors and characters were both, inseparable and adorable in their signature ways. The scrapes Gomer gets into are fairly routine and never exactly threaten national security, but Nabors' guileless delivery makes viewers tune in for more; the belly laughs are real. Shazam! 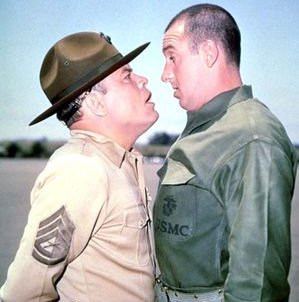 Gomer Pyle U.S.M.C. was a "spin-off" of the series, "The Andy Griffith Show".

Jim Nabors has had some jobs that required his appearance each year. Carol Burnett had him on the first episode of the "Carol Burnett Show" each season it aired. She felt that he was her good luck charm. Jim also sang the song, "Back Home Again In Indiana" each year at the opening ceremonies for the Indianapolis 500 race!

Barbara Stuart who eventually played the role of Sergeant Carter's girlfriend "Bunny", had also appeared on the TV show earlier as "Hannah, The Dragon Lady" on episode #8, "Gomer And The Dragon Lady".

Forrest Compton who eventually played the role of "Colonel Gray", had previously appeared on Gomer Pyle U.S.M.C. as a Captain.

Jim Nabors was nothing like his Gomer Pyle character. He had a Bachelor of Science degree in Business Administration from the University of Alabama. He used that business ability to his favor too! He negotiated a partial ownership of the Gomer Pyle U.S.M.C. TV show, thereby, sharing in the profits. He also used his business abilities and his popularity as Gomer Pyle to aid his singing career. He produced more than 45 of his own easy listening albums with five going gold and one even went platinum! Jim had to mostly give up his performing career due to years of illness due to a bad liver. He eventually had a liver transplant. He started a new life in Hawaii where he operated a macadamia nut plantation.

Gomer Pyle was stationed at Camp Henderson in California.