NBC
Added to the database on December 13, 2009
Rate
(24 votes)
Cast & Characters | Broadcast History | Theme Song | DVDs | Watch Episodes | Photos | Trivia | Comments
The A-Team is an action adventure series about a fictional group of ex-United States Army Special Forces personnel who work as soldiers of fortune, while on the run from the Army after being branded as war criminals for a "crime they didn't commit". The show featured Mr. T and aired on NBC from 1983 to 1987.
Guilty pleasures don't come more guilty than The A-Team, television's only tongue-in-cheek drama about the exploits of renegade Vietnam vets. The primetime series' 1983 debut season was intentionally ludicrous, encouraging viewers to enjoy sundry talents of a colorful cast and laugh off storylines perhaps sillier than those on Charlie's Angels. Co-created by Stephen J. Cannell (Wiseguy) and Frank Lupo (Hunter), The A-Team introduced Lt. Col. John "Hannibal" Smith (George Peppard), the cocksure leader of a band of fugitive American soldiers framed for a crime in Vietnam and now thriving in Los Angeles. Hiring themselves out as soldiers of fortune, Hannibal's crew--including Lt. Templeton "Face" Peck (baby-faced Tim Dunigan in the pilot, Dirk Benedict thereafter), Sgt. Bosco Albert "B.A. (for 'Bad Attitude')" Baracus (Mr. T, outfitted with his trademark gold), and, most comically, Capt. H.M. "Howling Mad" Murdock (Dwight Schultz)--assist (mostly) ordinary people having a problem with bad guys. The A-Team ostensibly charges large fees, but much of the time the guys seem to be doing pro bono work for the helpless. 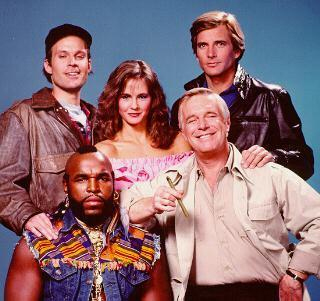 (Ten years ago / In 1972), a crack commando unit was sent to prison by a military court for a crime they didn't commit. These men promptly escaped from a maximum security stockade to the Los Angeles underground. Today, still wanted by the government, they survive as soldiers of fortune. If you have a problem, if no one else can help, and if you can find them, maybe you can hire... The A-Team.

The A-Team On DVD

George Peppard probably felt fairly comfortable when cast in his role as the tough guy "Hannibal" as he had served in the Marine Corps. By the fifth season, however, George was obviously ready to ditch the role! When the A-Team was cancelled, George was visibly thrilled! He stated on several occasions that he was afraid that the show would remain so popular that it would never end!

Many of us may be much more familiar with Dwight Schultz in his role as "Reg Barclay" on "Star Trek: The Next Generation" and "Star Trek: Voyager".

During the opening credits of most episodes, you can see a "Cylon Warrior" pass by Dirk Benedict. Cylons were his enemies as "Starbuck" in the cast of the 1978-1979 series "Battlestar Galactica".

Robert Vaughn joined the series as General Hunt Stockwell in the 5th season. He kept promising that he would help the A-Team clear themselves with the law if they would just do a few more little jobs for the government. He never fullfilled his promise. Maybe you remember Robert Vaughn in his best-known role as Napoleon Solo in "The Man From U.N.C.L.E.