NBC
Added to the database on May 14, 2004
Rate
(11 votes)
Cast & Characters | Broadcast History | Theme Song | DVDs | Watch Episodes | Photos | Trivia | Comments
Friends is a sitcom created that aired on NBC for ten seasons from 1994 to 2004. The series revolves around a group of friends in Manhattan going trough the humorous trials and tribulations of relationships, work and personal life. 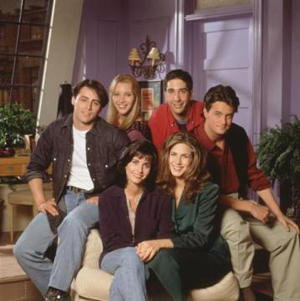 A television phenomenon and genuine American cultural artifact, Friends chronicled the misadventures of six twentysomethings navigating their way through the not-so-fast lane of Manhattan life. Like all great sitcoms, Friends featured unforgettable characters we all could identify with: self-absorbed but sweet-natured Rachel; hypercompetitive siblings Monica and Ross; daffy but street-smart Phoebe; insecure and soulful Chandler; and self-styled ladies' man Joey. Like Seinfeld and Frasier, Friends captured the heady zeitgeist of the roaring '90s.

{videobox}/media/video/friends.mp4{/videobox}
"I'll Be There For You" by The Rembrandts

The golden frame around the peephole was originally a mirror which one of the crew accidentally smashed. But because it still looked good they decided to leave it there.

Other titles considered for the show were "Friends Like Us", "Six of One", "Across the Hall", and "Insomnia Cafe."

The theme song performed by The Rembrandts became a #1 single on the American pop charts.

The characters' full names are: - Rachel Karen Green - Phoebe Buffay (in "The One Where They All Turn Thirty" 7.14, she says that never knew her middle name since she had never seen her birth certificate and her twin sister, Ursula, had sold it to a Swedish runaway) - Joseph Francis Tribbiani Jr - Chandler Muriel Bing - Ross Eustace Geller - Monica E. Geller (Monica's middle name is never said).

Out of the six friends, Chandler is the only one to not have any siblings. Rachel has two sisters, Monica and Ross are brother and sister, Phoebe has a twin and a half-brother, and Joey has seven sisters.

No Friend ever made more money doing the show than any others. They started out making $22,500 per episode and ended up making $1,000,000 per episode. All negotiations were done in unison. Kudrow said, "The six of us are far stronger than just one person."