NBC
Added to the database on December 8, 2009
Rate
(5 votes)
Cast & Characters | Broadcast History | Theme Song | DVDs | Watch Episodes | Photos | Trivia | Comments
Frasier is a sitcom that aired on NBC for eleven seasons from 1993 to 2004. A spin-off of Cheers, Frasier stars Kelsey Grammer, David Hyde Pierce, John Mahoney, Jane Leeves and Peri Gilpin. It is one of the most successful spin-off series in television history, as well as one of the most critically acclaimed comedy series of all time.
Frasier provides a weekly dose of the neuroses and tribulations suffered by an insecure and pompous psychiatrist, Dr. Frasier Crane, host of a Seattle radio advice show at KACL. The twice-divorced doctor's peaceful home life of fine cigars and haute cuisine was shattered when his gruff, ex-cop father, Martin, was injured in the line of duty and forced to move in with Frasier. Martin brought with him a semi-psychic, live-in home-care provider, Daphne Moon, his pesky Jack Russell terrier, Eddie, and a duct-taped recliner that clashes with Frasier's more aesthetically pleasing Eames and Wassily chairs. Their home is frequently visited by Frasier's snobbish and competitive brother, Niles, a fellow psychiatrist whose longtime romantic interest in Daphne was finally happily realized at the conclusion of Season 7. At work, his slightly jaded producer and man-hungry single parent Roz Doyle, supports Frasier. Some of the people who voice the callers to Frasier's radio program are often bigtime celebrities. 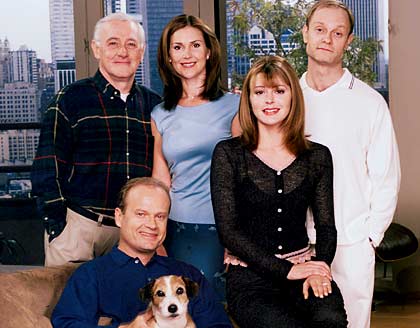 Frasier, starring Kelsey Grammer in his Emmy Award-winning title role of Dr. Frasier Crane, made history by becoming the first series, comedy or drama, to achieve a record five consecutive Emmy wins for Outstanding Comedy Series. With this achievement, the series stands ahead of "Cheers", the series from which "Frasier" was spun-off. Overall, "Frasier" earned a total of 37 Emmys (more than any other series in history), including four for Outstanding Lead Actor in a Comedy Series for Kelsey Grammer and four for Outstanding Supporting Actor in a Comedy Series for David Hyde Pierce. It's also interesting to point out that Kelsey Grammer played the part of Frasier for 20 years, tying him for the longest duration playing the same character on television and, that the show included guest appearances from almost all regulars from Cheers, excluding Kirstie Alley.


« Flipper The Fresh Prince Of Bel-Air »