ABC
Added to the database on December 29, 1995
Rate
(13 votes)
Cast & Characters | Broadcast History | Theme Song | DVDs | Watch Episodes | Photos | Trivia | Comments
Welcome Back, Kotter is a sitcom that aired on ABC from 1975 until 1979 and starred Gabe Kaplan as Mr. Kotter, who returns to his alma mater to teach a group of remedial students, and a young John Travolta, the head of Kotter's high school misfits, the Sweathogs. 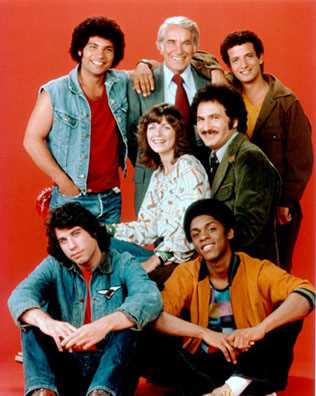 Travel back to a time when sitcoms were recorded live on tape before a studio audience and dialogue was dominated by nonsensical catch phrases, like "Up your nose with a rubber hose!" and "Off my case, potato face!" The year was 1975. Saturday Night Fever had yet to make John Travolta a star, and stand-up comedian-turned-creator Gabe Kaplan had yet to become a late-night poker mainstay. Welcome to four years at Brooklyn's Buchanan High School.

Along with What's Happening, Welcome Back, Kotter was what the cool kids were watching--just as their kids would turn to Freaks and Geeks in the years to come. Unlike the teens of Happy Days, Buchanan's remedial students aren't polite preppies, but slang-slinging hooligans. Gabe Kotter (Kaplan) serves as home-room teacher to a "pack of howling baboons" led by Vinnie Barbarino (Travolta), Arnold Horshack (Ron Palillo), Freddie "Boom-Boom" Washington (Lawrence Hilton-Jacobs), and self-described Puerto Rican Jew Juan Epstein (Robert Hegyes) Their adversary: Vice Principal Woodman (John Sylvester White), who lives to put a kibosh on their high jinks--just as he did when Kotter was a Sweathog in the 1960s.

Other regulars include Kotter's wife, Julie (Marcia Strassman, who hosts the featurette "Only a Few Degrees from a Sweathog"), and Rosalie "Hotzy" Totzy (Mary Hartman's Debra Lee Scott). At the time, Welcome Back, Kotter was more than just a show. It was a cultural phenomenon, spawning lunch boxes, schoolyard taunts, and the like. In retrospect, the jokes are cornier than ever, but the anything-goes spirit--crazy costumes and musical numbers--is hard to resist. At least that's true of the first three seasons. By the fourth, Travolta and Kaplan became scarce, and Kotter ran out of steam. Rest assured, though, that John Sebastian's clap-happy, chart-topping theme remains as catchy as ever.

"Welcome Back" by John Sebastian

Buy Welcome Back, Kotter on DVD

The original title of the series was to be simply "Kotter," but that was before composer John Sebastian had difficulty writing the theme song lyrics. He couldn't find enough rhyming words for the title. Giving up on that tack, he decided to compose lyrics that illustrated the premise of the show in a song called, "Welcome Back." The producers were so impressed with the song that they decided to change the series title to "Welcome Back, Kotter." The song was also released on a single which went to #1 on the charts.

The actors playing the four main Sweathogs were much older than the characters they played. By the final season, Ron Palillo was 29, Robert Hegyes 27, Lawrence Hilton-Jacobs 25, and John Travolta 24.

The show always began and ended with Gabe Kotter telling his wife Julie a joke, except for the last episode. In that episode, Marcia Strassman had left the set after a dispute, so Gabe Kaplan tells the last joke to a stuffed bear.

The show was originally banned in Boston. The Boston ABC affiliate did not want to air the show at first because they thought it was about busing, a very heated topic at the time. They eventually ran the show with no problems.

The series was based on Gabe Kaplan's stand-up routine "Holes and Mello Rolls" in which he recounts his experience as a remedial high school student. The characters were based on his classmates named in the routine. Vinnie Barbarino was based on two classmates, Eddie Lecarri and Ray Barbarino. Freddie 'Boom Boom' Washington was based on Freddie "Furdy" Peyton. Juan Epstein was based on a classmate known as 'Epstein the Animal'. Arnold Horshack's name was unchanged. A line from the routine "Up your hole with a Mello Roll" became the show's catchphrase "Up your nose with a rubber hose".

Gabe Kaplan and John Travolta both left the show after the third season. Kaplan left after two episodes in the final season due to, creative differences with producer James Komack. Kaplan's name still in the credits but, he rarely appeared in the show. On the other hand, Travolta's original five year contract was altered after the massive success of Saturday Night Fever. Finally, Travolta appeared in eight of the 22 episodes, for $2,000 an episode and, he was billed as "Special Guest Star".

The sweathogs' putdown line "Up your nose with a rubber hose!" was ranked #15 in TV Guide's list of "TV's 20 Top Catchphrases"

In the final season, the writing staff for the show was replaced by "seasoned comedy writers", who had earlier worked on Here's Lucy (1968), and other shows with actors much older than the high schoolers who were the focus of "Welcome Back Kotter". The new writers weren't capable of delivering the fresh, hip dialogue the show needed, and the ratings fell off quickly.

Gloria Swanson auditioned for the role of the school principal. But the character was changed to a male and became Mr. Woodman.

Farrah Fawcett and Kate Jackson auditioned for the role of Julie Kotter.

Jonathan Frakes tested for a role in this series.

Groucho Marx was to make a cameo appearance in the episode "Sadie Hawkins Day". The planned scene was Kotter doing his frequent impression of Marx, then Marx appearing with his reaction. But when the 86-year-old Marx arrived on the set, it was decided that he was too weak to perform and the scene was scrapped. Marx posed for publicity photos with the cast but they were never released due to his frail appearance.

One plan to continue the series was to have the Sweathogs graduate and go to college, with Kotter becoming a college professor, but the idea was ultimately rejected.

The Vinnie Barbarino character was originally going to be named Eddie Barbarini.

"Ooo, Ooo I Do!" was supposed to air on May 25, 1979, but the episode was pre-empted when then-president Jimmy Carter gave a press conference about the recent fuel crisis in America. The episode was aired a week later and was intended as a series finale, but "The Breadwinners" aired after it.

During the opening and closing themes we see a sign that says "Welcome to Brooklyn: The 4th Largest City In America". The sign was located on the right shoulder of the eastbound Belt Parkway just after the entrance ramp from the Verrazano Narrows Bridge which connects Staten Island and Brooklyn. It was later modified and is now an overhead sign over the center lane in the same direction.

In a 1978 People magazine article, Marcia Strassman stated that she did not get along with Gabe Kaplan and that she disliked working on the series. She tried to be released from her contract by publicly lambasting Kaplan. The rift split up the cast as Lawrence Hilton-Jacobs and Robert Hegyes sided with Kaplan and Ron Palillo sided with Strassman. John Travolta remained friendly with both. Palillo stated that he was happy when Kaplan left the series after the third season.