ABC
Added to the database on October 18, 1999
Rate
(57 votes)
Cast & Characters | Broadcast History | Theme Song | DVDs | Watch Episodes | Photos | Trivia | Comments
The Addams Family is a sitcom based on the characters in Charles Addams' New Yorker cartoons that aired for two seasons on ABC from 1964 to 1966. It is often compared to its working-class rival, The Munsters, which ran for the same two seasons, and achieved somewhat higher ratings. The show is the first adaptation of the characters to feature "The Addams Family Theme". 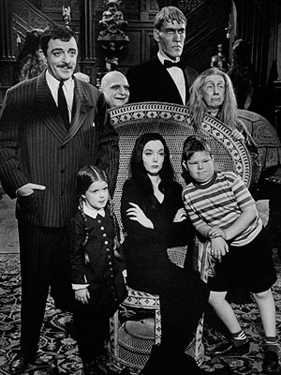 The Addams Family television sitcom portrayed a monster family whose moribund physical appearances were counteracted by each family member's exuberance for passion and adventure. Premiering the same year as The Munsters, this short-lived series was one of the first two shows to take issue with the Leave It To Beaver aesthetic that dominated television throughout the 50s, in which perfect families narrowly defined normality in the American home. Instead, it starred a family feared by neighbors, who within the boundaries of their haunted Victorian mansion invented their own thriving, not to mention fun, culture. The Addams Family proved that outsiders could be extremely gracious, educated, and interesting, even if eccentricities rendered their looks a threat.

The Addams Family were a macabre and wealthy family who lived on North Cemetary Ridge where the family members included rather odd individuals including Gomez who was the head of the house and had rather destructive instincts. His wife Morticia was the beautiful but somber lady of the house. Their oddball children were son Pugsley and morose daughter Wednesday. Grandmama was the family witch who notorious for casting spells on other family members. Uncle Fester was Gomez's wacky older brother who was always seemed to cause trouble. Lurch, their butler, was a seven-foot-tall warmed-over Frankenstein monster whose dialogue usually consisted solely of two words, "You rang?". Other recurring characters were Cousin Itt and Thing, a disembodied hand who was always willing to help out.

Each episode opened with one of the most famous snap-happy theme songs of all time. Who could ever forget the opening verse 'They're creepy and they're kooky, mysterious and spooky, they're all together ooky... The Addams Family!'

Buy The Addams Family On DVD

The Addams Family was created by Charles Addams who had worked together with famed sci-fi author Ray Bradbury on an idea about a wealthy, monstrous type family who lived among normal humans and had no idea that they were different in any way or that others were afraid of them. When Addams and Bradbury failed to procure a publisher for their idea, they split up. Bradbury continued the idea as "The Elliot Family" and Addams as "The Addams Family". The Addams Family appeared as single cartoons in the "New Yorker Magazine" from 1938 until Addams' death in 1988. There have been other Addams Family television series, Addams Family movies, and Addams Family video games.

In addition to writing the Addams Family theme song, Vic Mizzy also wrote the theme for "Green Acres" and "Captain Nice". Vic was one of the first TV theme composers to demand that he retain ownership of his songs. The theme to the Addams Family became an extremely popular tune at sporting events and every time it was played, Vic earned a few bucks!

Wednesday had a doll that she called, "Marie Antoinette" because Pugsley had chopped its head off with a tiny guillotine!

Morticia's favorite plant was a man-eater she called, "Cleopatra".

There was a human leg in the mouth of the swordfish that was mounted on the Addams Family's wall.

During production of the Addams Family, Carolyn Jones married Aaron Spelling, the executive producer of the show.

Pugsley was originally going to be called "Pubert". In the Addams Family movies, Gomez and Morticia have a third child named "Pubert". In the comics, Pugsley was an evil kid who lived next door to the Addams. When this 1964 TV series began, he became a loving, genius big brother who would do anything for his little sister Wednesday. Then in the movies he is Wednesday's younger brother who simply adores his big sister and will do her bidding no matter how evil her plans.

Ted Cassidy (Lurch) provided the opening narrative for each episode of "The Incredible Hulk TV Show". Fans generally figured that Lou Ferrigno who played the "monster" on that series also did the monster's telltale "growl" but that was also provided by Ted Cassidy! Don't feel too bad for Ferrigno though. He finally got to provide the Hulk's growl in the 2008 Incredible Hulk movie!

Thing had a girlfriend named, "Ladyfingers".