With fall in full swing and Thanksgiving just around the corner, The Classic TV Database has put together a list of some of the best Thanksgiving TV show episodes of all-time. We are always thankful for these episodes because they chock full of hearty laughs and offer some of the zaniest Thanksgiving antics we've ever seen. Come relive some of your favorite Turkey Day TV moments and be sure to stick around for seconds! 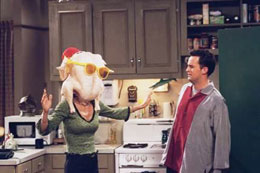 Bewitched
Samantha's Thanksgiving to Remember, 11/23/67
In this episode, Samantha Stephens (Elizabeth Montgomery) ditzy Aunt Clara botches up a spell and zaps the entire Stephens family back to the 17th century for the first Thanksgiving with the Pilgrims. Somehow nosy neighbor Gladys Kravitz gets in the mix as well. Darrin Stephens (Dick York) is accused of being a witch when he lights a match to make fire, but Sam gets them all back to the 20th century before it's too late.

The Bob Newhart Show
Over the River and Through the Woods, 11/22/75
Psychiatrist Dr. Bob Hartley (Newhart) and his gang of oddball friends end up having a bachelor type of Thanksgiving. With Bob's wife Emily out of town for the holiday, he and pals Howard, Jerry and Mr. Carlin, have a drunken weekend. This episode features a very well known and classic scene where Bob attempts to order Chinese food ("moo goo gai pan") while completely smashed.


Friends
The One With All The Thanksgivings, 11/19/98
A very funny episode from beginning to end as the gang discusses past Thanksgivings they have shared together. Chandler ends up getting angry with Monica over something that happened in the past and Monica tries to make him laugh and forgive her by arriving at his door with a turkey on her head. A fez and huge sunglasses complete the effect (which also has Joey running screaming out of the room).

Yet, that was the Barone family turkey in this T-Day gem, in which the well-intentioned mama Marie (Doris Roberts) tries to save everyone's cholesterol levels by making a healthier holiday feast. No one was impressed with the Tofurkey, especially son Ray, who had secretly ordered a real turkey and all the trimmings. And, in the end, Marie herself had to admit her bird was a turkey, especially when she was caught noshing on the real thing in Ray and Debra's kitchen that night.


Roseanne
We Gather Together, 11/14/89
The Connor's family Thanksgiving ends with a fight between Jackie and her mother, that Roseanne typically gets dragged into. The best moments belong to John Goodman, who just sits there watching the arguing bemusedly, enjoying his turkey. My family got a lot of mileage out of the line "Here I am at 5 in the morning, stuffing bread crumbs up a dead bird's butt." I’m pretty sure at least one person said that in our kitchen every year between 1989 and 2003.


Happy Days
The First Thanksgiving, 11/21/78
Frustrated that her family is spending Thanksgiving day watching football games, Marion Cunningham (Marion Ross) tells them all about the first Thanksgiving. This episode features funny reenactments, with even Fonzie (Henry Winkler) dressed as a pilgrim donning a wooden motorcycle.

WKRP In Cincinnati
Turkeys Away, 10/30/78
Probably the best-known episode of this classic series, it involves bored station manager Mr. Carlson, and an ill-conceived promotion involving the dropping of 20 live turkeys from a helicopter. Carlson figured the turkeys would gently float down to the ground and give Cincinatti a pleasant Thanksgiving surprise. You know what happens next; turkeys plunging to their deaths like little feathered bombs. Les Nessman's radio description of the scene is hilarious -- he even throws in a "Oh, the humanity!" for good measure -- as is Carlson's classic last line: "As God is my witness, I thought turkeys could fly."


The Cosby Show
Cliff's Wet Adventure, 11/16/89
Dr. Heathcliff Huxtable had reason to be upset in this season six episode, in which he is sent out to the store -- four times! -- to purchase ingredients Clair needs to prepare the family's Thanksgiving dinner. She had planned to make cornbread ... but forgot eggs. She wanted to whip up eggnog ... but forgot nutmeg (actually, she just demanded fresh nutmeg, because she already had jarred spice in the kitchen). And she wanted to make a pumpkin pie ... but forgot the canned pumpkin.

So Cliff had to go out to the store, four times (the eggs he bought on the third trip broke), in a fierce rainstorm, only to finally return home and find the fam at the table, and hot cornbread waiting. Claire had borrowed eggs from a neighbor, and in one final bit of Turkey Day injustice, Cliff opened the door to put his drenched clothing outside, only to be met with sunshine.


Full House
The Miracle of Thanksgiving, 11/20/87
This popular sitcom had all sorts of sappy holiday episodes, but the Thanksgiving episode from season one is especially poignant. It's the family's first year without their mother, so surrogate dads Jesse and Joey join the Tanner clan for a homemade Thanksgiving dinner made by tween daughter DJ— a meal that features a still frozen turkey and a demolished "Picture Perfect Pumpkin Pie".


Family Ties
No Nukes Is Good Nukes, 11/20/82
It's Thanksgiving at the Keatons but the turkey dinner might have to wait when Steven and Elyse head to an anti-nuclear weapons rally and get arrested.


Friends
The One Where Ross Got High, 11/25/99
TV series Friends actually loved Thanksgiving. The series featured many Thanksgiving themed episodes, but this one ranks as one of the funniest. Chandler (Matthew Perry) is nervous about live-in girlfriend Monica's (Courtney Cox) parent's Thanksgiving day visit, because he doesn't know why they don't like him. As the day goes on, secrets are spilled and by the end everyone is arguing. The gang also tries to stomach Rachel's (Jennifer Aniston) trifle dessert, that she inadvertently made with lady fingers, jam, custard and.... beef. Two years after this episode aired, Brad Pitt guest starred in another Thanksgiving themed episode titled "The One With the Rumor".

Seinfeld
The Mom and Pop Store, 11/17/94
George buys a car that once belonged to Jon Voight and Kramer tries to save a shoe repair shop, but the classic Thanksgiving moment belongs to Elaine and Mr. Pitt, as she wins a radio contest in order to get him a chance to hold the Woody Woodpecker balloon in the Macy's Parade.

The Brady Bunch
The Un-Underground Movie, 10/16/70
This popular sitcom- which still airs in syndication today- features an episode about Greg Brady (Barry Williams) making a home movie about the Pilgrims for his history class. The entire Brady family gets involved in reenacting the first Thanksgiving at Plymouth Rock. This show can be found on TV Land.

The Sopranos
He Is Risen11/15/01
Yeah, yeah, it was a Thanksgiving episode in April, but 'The Sopranos' always marched on its own schedule, so let's get past that. The best moment of this T-Day-themed installment occurred at Tony and Carmela's holiday dinner table, at which sister Janice was seated, along with Aaron, the latest schmucky boyfriend she'd dragged home. Aaron, we learn, is narcoleptic, and he falls asleep mid-meal. He wakes up when the doorbell at Casa Soprano rings, and Jackie April Jr. appears in the dining room.

Upon being introduced to Jackie, Aaron looks up and asks, "Have you heard the news? He is risen," providing not only a memorable 'Sopranos' quote, but also the episode's title. In other Thanksgiving happenings: After discussing leftover turkey sandwiches with his crew, stressed out capo Gigi Cestone takes a trip to the bathroom, where, as Tony points out, he dies like "how Elvis went."

Mad About You
Giblets for Murray, 11/17/94
At the first Thanksgiving Paul and Jamie host as a married couple, they try too hard to please everybody and end up making numerous trips downstairs to the corner deli. When the turkey is left unattended, Murray helps himself, so they have to replace it. Numerous times; one replacement is stolen and another is tossed out the window by Jamie in an attempt to "hide" it. Eventually, Fran finds out what has happened and tells everybody, but Paul and Jamie don’t know the secret is out, and their attempts to conceal the kitchen troubles get more and more absurd.

Cheers
Thanksgiving Orphans, 11/27/86
For some reason, the whole crew from the Cheers bar decide to spend Thanksgiving together (don't these people have families?).But the gigantic turkey, dubbed "Birdzilla' by Carla (Rhea Pearlman), takes forever to cook. At the end, a food fight ensues and Norm's never-seen wife Vera makes a cameo, but her face is covered in mashed potatoes so you still can't see what she looks like.

Buffy the Vampire Slayer
Pangs,
11/23/99
Spike, Angel, whipped cream and a Native American curse have thwarted The Buffster's plans to give the Scoobies a perfect Thanksgiving, a holiday which Anya pithily sums up thusly: "To commemorate a past event, you kill and eat an animal. It's a ritual sacrifice, with pie." Proving that even a former demon knows everything is better with pie.

We hope you are stuffed with delicious Thanksgiving TV memories now! Be sure to post your comments and share thoughts on your favorite Thanksgiving episodes below.