CBS
Added to the database on December 7, 2009
Rate
(10 votes)
Cast & Characters | Broadcast History | Theme Song | DVDs | Watch Episodes | Photos | Trivia | Comments
My Favorite Martian is sci-fi sitcom that aired on CBS from 1963 until 1966 that starred Ray Walston as Uncle Martin (the Martian) and Bill Bixby as Tim O'Hara.
My Favorite Martian first aired in September of 1963 on CBS and was probably one of the first sitcoms with a "bizarre" or fantasy premise to emerge in the early to mid 1960's. It joined the ranks with Mister Ed which began in 1961.The series centered around Tim O'Hara, who worked as a reporter for The Los Angeles Sun. Tim stumbled across a space-ship that crashed and discovered a Martian. Tim became friends with the Martian and began passing him off as his Uncle Martin. After all it wasn't that hard to pass him off, he could speak English and looked human. The only thing physically odd about him was that on occasions he would reveal a retractable antennae that would come out of the top of his head. Martin made it clear that he wasn't going to reveal himself to anyone other than Tim and he worked on his space ship while staying with Tim in the apartment above Mrs. Lorelei Brown's garage and when he wanted to, he would display his abilities that included, telepathy, moving objects just by pointing and he could make himself invisible. 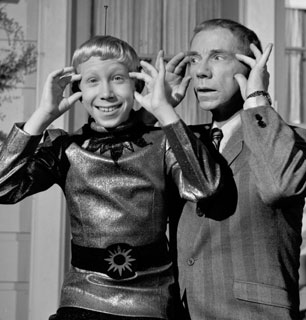 
My Favorite Martian On DVD


View all My Favorite Martian DVDs, books, merchandise and collectibles from Amazon.com

J. Pat O'Malley appeared in the very first episode of the 1969 TV show "The Brady Bunch"! He played the role of Mr. Tyler. The episode was titled "The Honeymoon".

In 1966, right after My Favorite Martian finished shooting, Bill Bixby had a supporting role in the movie "Doctor, You've Got To Be Kidding". One of his scenes was shot near a fireplace. That scene used Mrs. Brown's living room from "My Favorite Martian" as it's set!

In episode #37 of the series, "The Incredible Hulk", Ray Walston guest-starred with Bill Bixby who played the (starring) role of Dr. David Banner. The episode was titled, "My Favorite Magician"! Actually, both of the actors were members of a professional magicians' club in Hollywood!

Ray Walston won 2 emmys and was nominated for a 3rd for his role on the series "Picket Fences".

While filming episode #105, "Stop the Presses, I Want to Get Off", a Lion suddenly roared and crashed into a glass partition (breaking it) that was separating him from Bill Bixby! No one got hurt but it scared the h... out of Bill! Actually, the scene was originally supposed to be with Ray Walston and he refused to do it. They had to do a re-write of the script and everything! And don't worry ... the Lion wasn't hurt either.

During his inital interview, Bill Bixby said to the Producer, "Hello, I'm Bill Bixby." The Producer replied, "No, you're not. You're Tim O'Hara.

The series was filmed on stage 10 of the DESILU Studios. After My Favorite Martian, "Star Trek - The original series" used stage 10 to shoot scenes which took place on alien planets.

Uncle Martin's spaceship was made of wood and then painted silver. It was sold at a car auction in 1985 for $750!

Bill Bixby was the 2nd actor (Michael Landon was 1st) to star in 3 television shows that lasted 3 years or more. They were "My Favorite Martian", "The Courtship of Eddie's Father" and "The Incredible Hulk".

Just in case anyone isn't aware of it, we have to note how uncanny it was that Ray Walston played the part of someone tracking down Uncle Martin in the Disney remake film (also titled "My Favorite Martian") starring Christopher Lloyd!

Nine years after My Favorite Martian was over, Bill Bixby was a panelist on a game show called "Masquerade Party". You know, one of those where they have to guess who is the disguised person. Ray Walston was one of the guests. Surprise Bill!

Pamela Britton played the starring role on the 1957 "Blondie TV Show" that was based on the popular Blondie comic strip. The show only lasted one year.