CBS
Added to the database on November 23, 2009
Rate
(28 votes)
Cast & Characters | Broadcast History | Theme Song | DVDs | Watch Episodes | Photos | Trivia | Comments
Dallas is a drama that revolves around the Ewings, a wealthy Texas family in the oil and cattle-ranching industries. The series won four Emmy Awards, including a 1980 Outstanding Lead Actress in a Drama Series win for Barbara Bel Geddes. Throughout the series, Larry Hagman stars as greedy, scheming oil baron J. R. Ewing. The show also starred stage/screen actress Barbara Bel Geddes as family matriarch Miss Ellie, and movie Western actor Jim Davis in his last role as Ewing patriarch Jock Ewing before his death in 1981.
Dallas is an American equivalent to those British miniseries about historical chapters in that country's royal monarchy. Full of family in-fighting, political intrigue crossed with personal triumph or disappointment, and plenty of sensational infidelities and betrayals, Dallas is a captivating story of a wealthy oil family's power and travails. It is also uniquely fun and daringly absurd, albeit with a straight face; this hugely successful, primetime soap opera began in the late 1970s and ran 14 seasons in all, built on a handful of primary relationships that stretch credulity but never descend into self-parody. 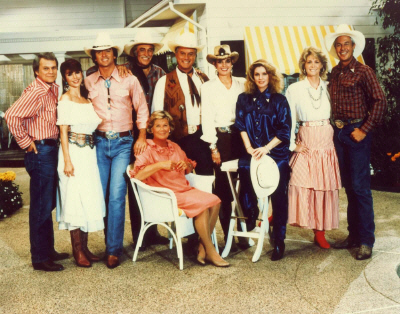 Not unexpectedly, Dallas begins with a Romeo and Juliet tale that instantly exposes an old feud between two families and strips the civilized veneer from several major characters. Bobby Ewing (Patrick Duffy), youngest of three sons of independent oilman Jock Ewing (Jim Davis), arrives at the Ewing clan's Southfork ranch just outside Dallas, Texas, with a new wife, Pam Barnes Ewing (Victoria Principal). Pam is the daughter of Digger Barnes (David Wayne), an old business rival of Jock's and one-time suitor of the Ewing matriarch, Eleanor (or "Miss Ellie," played by Barbara Bel Geddes). Pam's also the sister of a state senator, Cliff Barnes (Ken Kercheval), whose vendetta against the Ewings is played out in the legislature, imposing costly regulations on their business and holding committee investigations into questionable practices of company president J.R. Ewing (Larry Hagman). Pam's status as the newest Ewing causes an uproar in the family (besides being a Barnes, she also dated the Ewings' genial but lonely foreman, Ray Krebbs, played by Steve Kanaly) and prompts Dallas' charming villain, J.R., to make many Iago-like attempts, over the first two seasons, to drive her from Bobby's arms. Pam has a different set of problems with the other, jealous Ewing women, including J.R.'s possibly barren and alcoholic wife, Sue Ellen (Linda Gray), and teenage Lucy (Charlene Tilton), daughter of exiled Ewing son Gary (Ted Shackleford). With new and old resentments flying and everyone deeply suspicious of everyone else's motives (even the ailing Jock doesn't trust J.R.), there's plenty of drama to chew on. Still, storylines are often larger than the sum of these parts, with lots of kidnappings, marital affairs, plane crashes, and shootings ratcheting up suspense. Dallas is pure pleasure, a little guilty, perhaps, but not a sin.

The series ended each season with ratings-grabbing cliffhangers. Some notable cliffhangers included the landmark "Who shot J.R.?" episode in 1980, an unidentified floating female corpse in the Southfork swimming pool, a blazing house fire, Bobby being shot, and Bobby even being killed by Pam's crazed half-sister Katherine Wentworth. Patrick Duffy had decided to leave the series in 1985, which facilitated Bobby's death, but Duffy was offered a higher salary the following year and elected to return to the series (which had by then begun to suffer from a ratings drop). The intervening season where Bobby was dead was subsequently explained away as a dream of Pam's in 1986.[2] In 1987, Victoria Principal decided to leave the series and her character was written out in another end-of-season cliffhanger where her car crashed into an 18-wheeler and exploded. The show continued (with steadily declining ratings) until 1991, when the series finale saw J.R. seemingly defeated by his enemies and apparently taking his own life.

Dallas was the top-rated series on the air for three seasons! When it aired, the "Who Shot J.R." episode became the most watched episode in television history! The final episode of "M*A*S*H (1972)" beat that record in February of 1983. Larry Hagman was threatening to leave the series due to a contract dispute. The producers got prepared, just in case. If he would have left, the ambulance carrying J.R. to the hospital after his shooting would have crashed and caught fire in an accident. J.R. would have required extensive plastic surgery and Robert Culp (Star of the 1965 series, "I Spy") would have taken over the role.

"Knot's Landing (1979)" was the only Dallas "spin-off" but there's no doubt that it inspired the productions of several others such as "Falcon Crest (1981)", "Dynasty (1981)", and "The Colbys (1985)". In fact, Robert Foxworth who was offered the role of J.R. Ewing and turned it down, agreed to do a very similar role later on "Falcon Crest". After Foxworth turned down the role of J.R. Ewing, Larry Hagman refused the starring role in the series, "The Waverly Wonders" to become J.R. That was a good move as "The Waverly Wonders" didn't last very long.

Larry Hagman owns a ranch in Ojai, California named, "Odd Ball". Larry has some traits that may relate to that name. He has a ring made from his gallstones that were removed during a liver transplant. One day each week he doesn't speak at all to test his self-discipline. He makes autograph seekers either tell him a joke or sing him a song before he will give them an autograph. He's a vegetarian and his nickname is "Mad Monk of Malibu".

Larry is the son of Mary Martin, best known for her role on broadway as Peter Pan. Larry also is the godfather to Bridget Fonda.

Patrick Duffy's son Conor played the role of "Little J.R."on the final episode of Dallas. His son Padraic played Mark Harris on the show. On the series, "The Man from Atlantis (1977)", Patrick also played a character named Mark Harris.

The dream death that had the most impact on the series was Bobby Ewing's death. Originally, he died because Patrick Duffy left the series in the seventh season. Then he decided that he wanted to return for the ninth season. Patrick's wife told him that the only way that could happen is if his death had really been someone's dream. Duffy relayed this idea to the producers and even though that meant that they entire eighth season would become Pam Ewing's dream, they went along with the idea and Patrick Duffy returned.

When Jim Davis passed away, his character was reported as missing in the Amazon jungle. After a while, he was declared legally deceased. A picture of Jim was placed over the fireplace at Southfork Ranch after his death.