The Many Loves of Dobie Gillis

CBS
Added to the database on May 24, 2012
Rate
(13 votes)
Cast & Characters | Broadcast History | Theme Song | DVDs | Watch Episodes | Photos | Trivia | Comments
The Many Loves of Dobie Gillis is a sitcom that aired on CBS from 1959 to 1963 about a teenage boy named Dobie Gillis who cared about the only thing any teenage boy cares about ... teenage girls!
He had one girl in particular that he particularly desired (played by Tuesday Weld) but so did two rich playboy teenagers (one of whom was played by a very young Warren Beatty!). Dobie also had a genius, nerdy female friend who was determined to make Dobie her boyfriend and a beatnik and not too bright best friend named Maynard Krebs (played by Bob Denver, star of "Gilligan's Island") who constantly got Dobie into trouble. 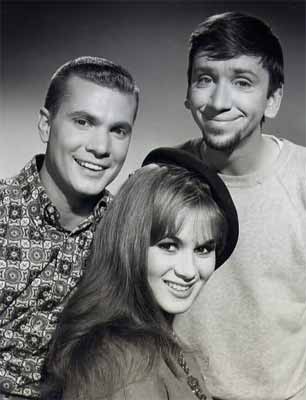 "My name is Dobie Gillis and I like girls. What am I saying? I love girls! Love 'em! Beautiful, gorgeous, soft, round, creamy girls. Now, I'm not a wolf, mind you. No, you see a wolf wants lots of girls, but me? Well, I just want one. One beautiful, gorgeous, soft, round, creamy girl for my very own. That's all I want! One lousy girl! But I'll tell you a sad, hard fact. I'm never gonna get a girl. Never. Why? Because to get a girl you need money. And standing between me and money is a powerful obstacle: a Powerful obstacle!"

The Many Loves of Dobie Gillis On DVD

The Many Loves of Dobie Gillis Trivia

The Gillis Family's home address was 285 Norwood Street; Central City. They also operated a grocery store at the same address.

The Many Loves of Dobie Gillis was not Dwayne Hickman's first major role on a TV series. He appeared for several seasons on "Love That Bob" before landing the lead role on this series.

Dobie Gillis, like most teenage boys, adored the best-looking girl in town even though her looks were about the only thing she had going for her. She was greedy and self-centered and constantly pushed Dobie into finding a career where he would earn tons of money.

Halfway through the second season of the Many Loves of Dobie Gillis, Maynard and Dobie become privates in the Army and get into just as much trouble there as they did at home. They were discharged from the Army by the beginning of the third season and enrolled in St. Peter Prior Junior College, still no closer to deciding what they might do with their lives and still getting into one jam after another.

Poor Dobie Gillis just simply had no idea how to "attack" life. At the beginning and end of each episode, Dobie would be seen in Central City's park next to a statue of "The Thinker". You know ... the one that has its elbow on its knee and its chin resting on its fist with a totally confused look on its face. Dobie would be in the same position, just as confused as the statue appeared to be!

The TV movie that aired on May 10, 1977, fifteen years after this series ended, and was titled, "Whatever Happened to Dobie Gillis?" Most viewers probably believed that it was just intended as a reunion movie but it was actually meant to be a pilot for a new series. Zelda had eventually snared Dobie and they had a teenage son! Dobie had become a partner in his family's grocery store. Maynard was still anti-social even though he was now well into middle age. By the way, Maynard was played by actor Stephen Paul in this pilot rather than by Bob Denver.

The Many Loves of Dobie Gillis had to compete for viewers with some pretty decent shows in its time slot including "The Life and Legend of Wyatt Earp", "The Virginian", and "Alfred Hitchcock Presents" but, luckily, all of those were serious series and didn't compete for the sitcom audience.