NBC
Added to the database on February 19, 2013
Rate
(9 votes)
Cast & Characters | Broadcast History | Theme Song | DVDs | Watch Episodes | Photos | Trivia | Comments
ER is a medical drama that aired on NBC from 1994 to 2009 . Created by best-selling author Michael Crichton, the Emmy Award-winning series has completed fourteen seasons as one of television's highest-rated dramas. The doctors and nurses of County's ER confront the daily challenges of a busy urban hospital, including overcrowded waiting rooms, staffing shortages, and the impact of life-and-death decisions. While they teach the next generation of doctors, each must tackle the demands of their personal lives, at times unsuccessfully. 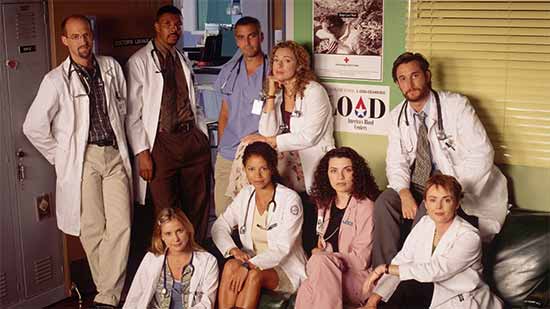 ER follows the medical personnel and patients in the emergency room of Chicago's fictional County General Hospital. This group of young doctors struggle to save lives while trying to maintain their own emotional balance. There was a great deal of yelling and running down corridors, as blood spurted and doctors rattled off diagnoses. Rushing about were Ross, the womanizing, dreamboat pediatrician at the center of much of the action, both in the ER and out; Greene, the earnest chief resident, whose job stress was augmented by that of his home life with his demanding lawyer-wife, Jennifer; Lewis, the straight arrow resident still looking for Mr. Right; Benton, the brusque, demanding black supersurgeon; Carter, the wide-eyed, sometimes inept first year resident assigned to Benton; Hathaway, The troubled chief nurse; and Morgenstern, the predictably crusty head of the ER.

The show ran for 15 seasons with a total of 331 episodes, becoming the longest-running primetime medical drama in American television history. It won 23 Emmy Awards, including the 1996 Outstanding Drama Series award, and received 124 Emmy nominations, which makes it the most nominated drama program in history. ER won 116 awards in total, including the Peabody Award, while the cast earned four Screen Actors Guild Awards for Outstanding Ensemble Performance in a Drama Series.

ER was originally going to be a movie directed by Steven Spielberg. When it became the ER TV show instead, Spielberg did "Jurassic Park" instead. The med-evac helicopter you've seen on the ER TV show is actually owned by the University of Chicago Hospital.

Episode #70 of the ER TV show titled, "Ambush", was aired "Live" (except on the West Coast) rather than filmed. This drew a huge audience. You could be sure that it was live because in one scene Doctor Ross (George Clooney) was in the break room watching a Chicago Cubs game against the Astros. That game was also being shown live at that time.

George Clooney appeared on another series a decade before this ER TV show. It was a comedy called "E/R (1984)! It starred Elliot Gould as Doctor Sheinfeld who is a physician at the emergency room of a Chicago hospital. Sound familiar? George Clooney's character was named Mark "Ace" Kolmar.

After seeing him in "Pirates of Silicon Valley", Steve Jobs (then CEO of Apple Computers) invited Noah Wyle (Doctor John Carter) to the MacWorld computer trade show. Noah went on stage and gave Steve's speech pretending to be him. Many people in the audience did not notice they were listening to the wrong guy!

George Clooney is not the only entertainer in his family. His father was a TV newsman who also was host of a talk show. His uncle was actor Jose Ferrer and his aunt was singer Rosemary Clooney.

Julianna Margulies was listed as a guest star in the first episode of the series. Her character (Carol Hathawawy) had attempted suicide and was meant to be brain dead, but they decided to "bring her back to TV life" and she became a regular cast member.