ABC
Added to the database on September 26, 2008
Rate
(15 votes)
Cast & Characters | Broadcast History | Theme Song | DVDs | Watch Episodes | Photos | Trivia | Comments
Diff'rent Strokes is an sitcom that aired on NBC from 1978 to 1985, and on ABC from September 1985 to March 1986. The series stars Gary Coleman and Todd Bridges as Arnold and Willis Jackson, two African American boys from Harlem who are taken in by a rich white Park Avenue businessman named Phillip Drummond (Conrad Bain) and his daughter Kimberly (Dana Plato), for whom their deceased mother previously worked.
More than just a ratings hit for NBC, the Norman Lear/Bud Yorkin-produced Diff'rent Strokes was a pop-culture phenomenon, thanks largely to the wise-beyond-his-years performance of star Gary Coleman. Launched in November 1978 as a mid-season replacement for the failed Joe Namath series The Waverly Wonders, Diff'rent Strokes vaulted to no. 27 in the Nielsen ratings; audiences responded to the warmth and humorous culture clash between wealthy Philip Drummond (Lear vet Conrad Bain) and Arnold and Willis (Coleman and Todd Bridges), the sons of his late housekeeper whom he adopted. Though Bain, Bridges, Dana Plato (as Bain's daughter), and Charlotte Rae (as housekeeper Mrs. Garrett) all delivered solid performances, it was Coleman's charm, his timing, and most of all, his catch phrase "Whatchoo talkin' bout?" that drew in viewers. 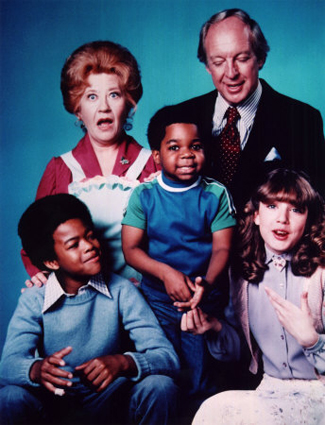 The series was so successful that NBC used it to launch or boost two other shows: The Facts of Life, which sent Mrs. Garrett to run a girls' school, and the McLean Stevenson program Hello, Larry, which followed Strokes on the network. Though perhaps best known to current audiences for the unfortunate luck suffered by several of its cast members after the show's cancellation in 1986, this first-season set offers a pleasant reminder of the show's charms.

Although we never saw Mr. Drummond do much work, his fortune came from his career as the President of Trans Allied, Inc.

Mr. Drummond's housekeeper, "Mrs. Garret", became the star of a "spin-off" TV show titled, "The Facts of Life (1979)". In fact, the very first episode of "The Facts of Life" was a crossover episode with "Diff'rent Strokes".

Philip Drummond also appeared on a few episodes of the TV show, "Hello Larry". He and Larry were old Army buddies.

Gary Coleman, who played loveable Arnold Jackson, was born with a defective kidney and received a transplant at five years of age. The abnormal functioning of his kidney during his first five years of life is what caused him to be smaller than normal for his age.

Todd Bridges had the "child star" problems that many other young people experience when they achieve great success early in life. He couldn't get work due to being "type cast" as Willis Jackson. After some trouble with the law over drug charges, however, Todd really turned his life around! He fought his way back into show business, not only as a producer and director behind the camera, but also as an actor! He also got married and had a son and he travels all over the U.S. lecturing at schools and churches about the value of leading a "clean" life without drugs, gangs, etc.