FOX
Added to the database on February 14, 2013
Rate
(7 votes)
Cast & Characters | Broadcast History | Theme Song | DVDs | Watch Episodes | Photos | Trivia | Comments
That '70s Show is a period sitcom that aired on FOX from 1998 until 2006 and centered on the lives of a group of teenage friends living in the fictional suburban town of Point Place, Wisconsin in the 1970s. 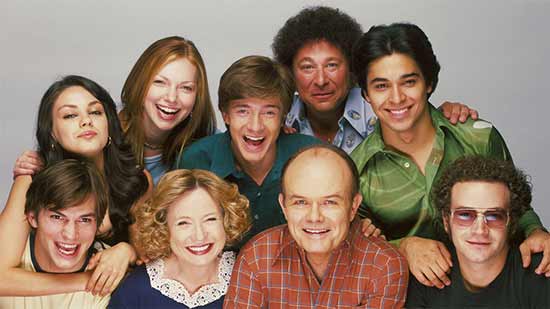 Back in the days of Led Zeppelin 8-tracks, TaB colas, and Farrah Fawcett posters, "That '70s Show" continues to flashback to the times where bell bottoms were the hip thing. Set in the Wisconsin suburbs, Eric Forman lives under the authority of his parents, Red and Kitty. Next door is his girlfriend/neighbor, Donna Pinciotti and her parents Bob and Midge. The rest of the gang includes Jackie, and her on again-off again boyfriend, Kelso, Hyde, a conspiracy theorist who believes Xerox will take over the world, and Fez, a foreign exchange student who is soaking up American culture like a sponge. The gang mostly likes to spend their time in Eric's basement, pondering their lives, parents, and their futures, but they get into many funny mishaps and adventures in their teenage lives.


View all the That '70s Show DVDs, books, merchandise and collectibles from Amazon.com

That 70s Show was originally titled, "Teenage Wasteland" but the named was changed to, "That 70s Show" prior to FOX's airing of the first episode.

The bride and the bridesmaids in episode #41, "The First Time" had all previously appeared in James Bond movies.

The Fox Network introduced several sitcoms in the 1998/99 season but this was the only one to make it to a second season (that is unless you count "King of the Hill" which actually began mid-season in January of 1999).

We know that Donna has at least two sisters. One named "Valerie" was mentioned in episode #2, "Eric's Birthday" but never seen. Another sister, Tina, actually appeared in episode #5, "Eric's Burger Job," but only that one time. Neither one was every even mentioned again.

Fez only mentioned his real name one time on That 70s Show. We didn't get to hear what he was saying as the school bell rang while he was saying it. We know it was a very long name by the amount of time that Fez was speaking. Also, Hyde said, "We'll never be able to remember that. I'll just call you Fez." There's no mystery to be discovered here however. Wilmer Valderrama who plays Fez was actually reciting the first names of all the cast members. "Fes(z) was used on the show as an acronym for "foreign exchange student".

Ashton Kutcher told the producers at FOX that he would need to know whether he had been cast as Michael Kelso by 3:45 PM on the day he read for the part. He already had an offer for a series called, "Wind On The Water" and had to let NBC know whether he would accept that role by 4 PM. He really didn't want that role as he would have been playing a surfing cowboy! Luckily, he was cast as Kelso. "Wind On The Water" only lasted two episodes!

The fifth season episodes are all named after Led Zeppelin song titles!

That 70s Show could really have benefited from a research team! There have been so many historical and other errors that they are really too numerous to mention them all here! Here are a few: In a couple of episodes, Kitty eats Ralph's Supermarket ice cream. Ralph's supermarkets are only located in California and Nevada, there are none in Wisconsin. Kelso wore a t-shirt with the phrase, "Go Ahead, Make My Day" on it from the movie, "Sudden Impact" which wasn't seen in theaters until 1983! The license plate at the end of That 70s Show's opening credits is yellow with black letters. Wisconsin plates were actually white with red letters. Characters were often seen drinking soda or beer from "flip-top" cans which did not exist at the time. In episode #74, "Canadian Road Trip", they really messed up! When they arrived at the border a road sign misspelled "Winnepeg"; they sing a line from the song, "O Canada" that wasn't added until 1981; and there's a map that shows "Nunavut Territory" which didn't become a territory until 1999. In episode #111, "Over The Hills And Far Away", a sign reads "Home of the Golden Eagles". The team was actually called the "Marquette Warriors" until 1995.

Mila Kunis moved from Ukraine to Los Angeles when she was seven years old. She says that she learned to speak English by watching "The Price Is Right" on television because Bob Barker spoke slow enough for her to understand. While she was cast as a high school student on the show, she was actually only 14 years old when filming began.

Danny Masterson often drops in on several Los Angeles nightclubs to DJ for the evening. When he does so, he uses the name, "DJ DonkeyPunch".

Tanya Roberts grew up in the Bronx. It took her five years of voice training to get rid of her accent! Most of today's viewers remember Tanya from her role as "Sheena" on the 1984 TV series of the same name. Some of us also fondly remember her as Julie Rogers, the last "Angel" to join the cast of "Charlie's Angels (1976).

Unlike many actors who were born outside the USA and moved here, Wilmer Valderrama was born in Miami, Florida and moved to Venezuela at the age of three.

Kurtwood Smith has been cast as three different "Star Trek" characters. He played the "Federation President" in the movie, "Star Trek VI: The Undiscovered Country (1991)", "Thrax" on "Star Trek Deep Space Nine (1993)" in the episode titled, "Things Past" and "Annorax" in the 2-part episode of "Star Trek Voyager (1995) titled, "Year Of Hell".