ABC
Added to the database on September 16, 2008
Rate
(17 votes)
Cast & Characters | Broadcast History | Theme Song | DVDs | Watch Episodes | Photos | Trivia | Comments
Laverne & Shirley is a sitcom that ran on ABC from 1976 to 1983 starring Penny Marshall as Laverne De Fazio and Cindy Williams as Shirley Feeney, roommates who worked in a fictitious Milwaukee brewery called "Shotz Brewery".
As a spin-off from Happy Days, Laverne & Shirley was an instant hit and one of the most popular sitcoms of the '70s. It's a bit quaint by contemporary standards, and its light-hearted sentiment is strictly old-school, due to the crowd-pleasing influence of producer and cocreator Garry Marshall, a veteran of The Dick Van Dyke Show whose subsequent film career peaked early with Pretty Woman. As working-class roommates in mid-1950s Milwaukee, Laverne De Fazio (Penny Marshall, future director and Garry's sister) and Shirley Feeney (Cindy Williams) were a classic case of opposites: Laverne was relatively saucy and cynical, while Shirley was cheerfully naive and eternally optimistic. 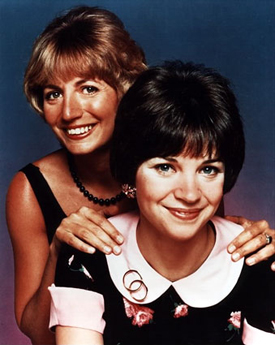 As bottle-cappers at the Shotz brewery, they regularly associated with colleagues (and eventual neighbors) Lenny (Michael McKean) and Squiggy (David L. Lander), and as an inaugural ratings-booster, Happy Days superstar Henry Winkler (as "Fonzie") appears in the first three episodes including "Bowling for Razzberries," later named by TV Guide as a classic episode. As Shirley's crooning would-be beau, Carmine "The Big Ragoo" Rugusa (Eddie Mekka) provided a touch of romance to Shirley's otherwise lackluster love life.

Despite personal rancor that later erupted between its energetic costars, Laverne & Shirley was always a showcase for polished, professional comedy and effortless chemistry between characters, giving it the same widespread appeal later enjoyed by Friends. A mid-season replacement with a prime time-slot (following Happy Days at 8:30 Tuesdays on ABC) the show placed its good-natured characters in a variety of standard sitcom predicaments, typically set in L&S's apartment, the "Pizza Bowl" diner run by Laverne's father Frank (Phil Foster), or the Shotz brewery, where some of the show's funniest slapstick humor emerged.

Laverne and Shirley worked together on an assembly line at the bottle-cap division of the Shotz Brewery in Milwaukee, Wisconsin. Their neighbors Lenny & Squiggy also worked at the brewery as truck drivers.

Although the Laverne and Shirley TV show was technically a "spin-off" of the TV series, "Happy Days (1974)", the girls only very briefly appeared on that series as dates of Fonzie and Richie Cunningham. Later, Fonzie would often visit Laverne and Shirley on this series.

In the fall of 1980, most of the characters moved to Burbank, California. Laverne and Shirley tried to start movie careers, Frank and Edna opened a new restaurant called "Cowboy Bills" and Carmine came along to be with Shirley.

Long before he became the host of the Tonight Show, Jay Leno appeared on Laverne and Shirley in a guest-starring role.

Laverne and Shirley was the number 1 TV show on the air in both its third and fourth seasons!

Laverne and Shirley lived together in a basement apartment. Their actions and personalities were so much alike that Laverne's blouses and sweaters had an "L" on them so that people could tell them apart. Laverne's favorite drink was milk and Pepsi.

Cindy Williams left the TV show in 1982 due to disagreements with Penny and Garry Marshall (Garry was executive producer of this series and "Happy Days" and was Penny's brother). Shirley's disappearance was explained by having her marry an Army medic named Walter Meany (making her name "Shirley Feeney Meany) and going with him on an overseas assignment. It was no surprise that the series fizzled after that. After all, the interaction between Laverne and Shirley was what made the TV series funny! Also, a new series called "The A-Team (1983)" had just started airing on NBC and stole a considerable portion of the serie's audience.